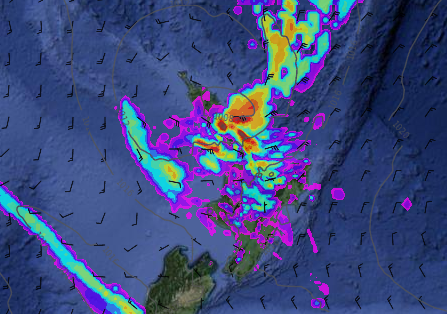 A small low near Northland will tomorrow spread heavy downpours across the upper North Island – and much like last Sunday the bulk of the rain is offshore, but is brushing many populated areas.

The air flow is being pulled down towards New Zealand from south of Tonga and will help spark some very heavy downpours to the north east of the North Island – with the easterly flow pulling this into parts of Northland, Auckland, Coromandel Peninsula, Bay of Plenty, East Cape, Gisborne and to some degree Waikato and Hawkes Bay.

The low itself is not very aggressive but tapping into the sub-tropical air means downpours heavy enough to cause localised flooding is possible.

High pressure further south will ‘squash’ against the small low, creating breezy to brisk easterly quarter winds – which will swing more southerly by night time as the small low tracks by and rain eases behind it.

WeatherWatch.co.nz has been closely monitoring the data on this low since last Monday and little has changed – with the centre of the low tracking along the upper North Island’s north eastern Coastline, basically in a line from Northland to East Cape.

It will be dry, or mostly dry, just to the west of this upper North Island rain band.

WeatherWatch.co.nz says eastern facing parts of Northland, Coromandel Peninsula along with most of Bay of Plenty and East Cape are the areas most exposed to the heaviest rain.  View the free rain maps on our website and free app for more specific details and timing.