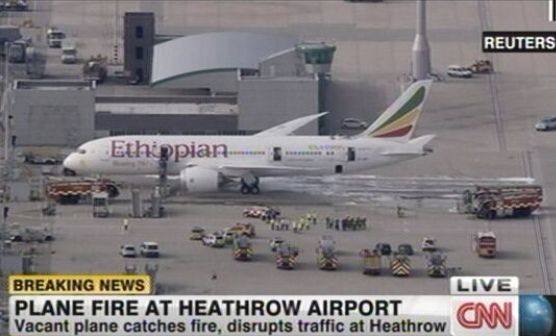 The fire ignited on an empty 787 operated by Ethiopian Airlines that was parked at London’s Heathrow airport. No one was hurt and the incident shut runways for about an hour before operations resumed, the airport said.

Details were unclear about the fire’s cause or location aboard the plane.

In a separate incident on Friday local time, Thomson Airways reported a “technical issue” aboard its Dreamliner flying from Manchester, England, to Florida. The aircraft returned to Manchester as a “precautionary measure,” Thomson said in a statement.

Engineers were “inspecting the aircraft,” the statement said. Passengers were transferred to another plane. The airline offered no other details of the problem.

The Dreamliner, which has been flying since 2011, has been closely watched since last January when all 50 of the world’s 787s were grounded due to overheating problems in its new light-weight lithium-ion battery system.

The planes were allowed to return to service in April after Boeing engineered a solution that satisfied U.S. aviation authorities.

Heathrow reopened Friday evening (Sat morning NZT) and Boeing officials were at the airport to analyze the problem, the company said.

It was not known if the battery system was associated with the latest incident, but a statement released by Ethiopian Airlines said the jet had been “parked at the airport for more than eight hours” before the fire.

“If today’s Boeing 787 problems are battery related,” she tweeted, “the FAA may reconsider its decision to allow them to fly before NTSB identified” what caused the battery troubles.

The National Transportation Safety Board tweeted it was sending an “accredited representative” to the airport to help the investigation. A statement from the Federal Aviation Administration said it was “aware of the situation” and was in contact with Boeing as officials “assess the incident.”

The news sent Boeing’s shares on Wall Street down more than 4%.

Boeing’s stake is huge. Hundreds of millions of dollars are riding on the success of the Dreamliner, which represents a new generation of lighter, more efficient money making airliners.

It’s development was marked by production delays and other problems.

Dreamliner’s lithium-ion batteries were blamed for two overheating instances this year in Boston and Japan. No one was hurt in either case.

In March, the FAA approved a Boeing certification plan to fix the 787 battery system and prove the new design is safe.

A team of experts from Boeing and from outside the company redesigned parts of the battery system in what they called a “robust” fix that included separating the battery cells, integrating a new charging system, and setting the batteries in a containment box that would vent outside the aircraft any smoke from overheating batteries.

The Dreamliner boasts high fuel efficiency because of the lightweight carbon composite materials used in its wings and fuselage.

Currently, United Airlines is the only U.S. Dreamliner operator. In an apparent show of confidence in the new aircraft, United announced last month that it was ordering 20 additional 787s, specifically the 787-10 model, a longer version of the plane.

What has this got to do with the Weather??

Hi there, we have many pilots and air travellers on our site and we have big demand for these news stories. WeatherWatch.co.nz will always cover aviation, environmental and outer space news stories too. It’s been that way since day one!  As we say to others, you don’t have to read the stories that don’t interest you and if you really want a "weather only" website there any many hundreds of those out there too.