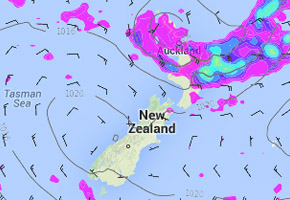 The short story for the first official day of spring is the weather will be dry for the South Island with sunny areas for many, a bit damper looking in the North Island although some remain dry.

A low pressure system sits just to the northeast of the North Island tomorrow creating a southeasterly airflow. For the most part about the upper North Island morning rain or showers clear although skies may remain fairly cloudy with breezy southeasterly winds, showers may hang about western Waikato and northern parts of Auckland for much of the day finally easing in the evening. The Bay Of Plenty also sees rain with the potential for heavy falls at first then easing around midday to showers which clear in the
evening.

About the lower North Island winds are fairly gusty from the east or southeast, cloudy in the east with patchy showers. Rain moves into Gisborne / northern Hawkes Bay in the afternoon with the chance of heavy falls,
heavy rain moves a little further south into the rest of Hawkes Bay during the
evening. Taranaki down to Kapiti in the west sees fairly thick high cloud
although conditions are mainly dry, in the evening there may be a spot or two of
rain.

Wellington gets a mix of sunny areas and some cloud, sun more likely from afternoon.

For the South Island the story is more simpler, mostly sunny conditions along the West Coast with light winds for South Westland and southeasterlies further north. North Westland may see some high cloud and
Nelson does too. In the east about Marlborough skies are fairly cloudy during the day, drizzle patches are possible from evening onwards.

Canterbury has some morning cloud then sunny spells break through in the afternoon
especially Banks Peninsula northwards, further south skies look mostly sunny all
day. Southland and Otago gets mostly sunny weather with light winds, perhaps a
touch of morning cloud about. Southland could see some coastal cloud during the
day too.

Okay Spring, crank up the westrerlies please.  Bring the warm, sunny weather we have been waiting for!!  It hasn’t been 20C since the beginning of August here in Christchurch.

Despite the optimistic aproach of the idiot in government the planet has not speeded it’s orbit and spring will sprung on September 21st.
But why let facts iterfere with foolishness eh?

Wow, remove your chip and enjoy the warmer weather.  Spring usually arrives at my place in late August, early September.  Please don’t confuse the government with the idiot that wrote your comment.