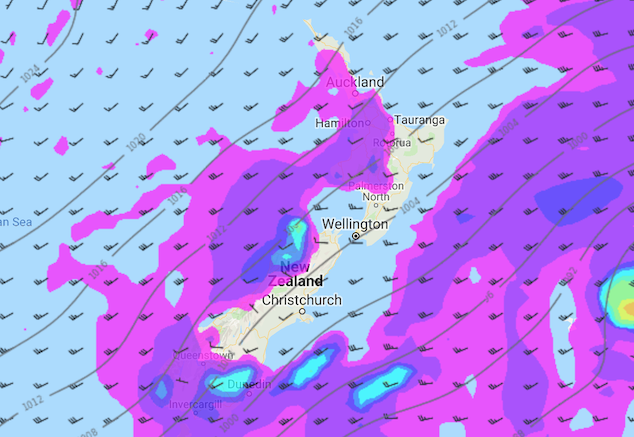 A cold southwesterly airflow lies over New Zealand on Monday.

Showers for the western North Island for much of the day, possibly heavy in the morning with a risk of hail / thunder then gradually easing. Fresh southwesterlies. Snow to 400m in the morning about the Central Plateau and Taranaki area then gradually lifting. Fresh southwesterlies along the east coast with a mix of sun and cloud, there may be a shower mainly about exposed coastal fringe areas like Mahia Peninsula.

Showers north of about Greymouth (mainly coastal) and also for Fiordland, sunny spells elsewhere along the West Coast with fresh cold southwesterlies. Cloud thickens in the afternoon bringing widespread showers for all then dry areas developing again in the evening for South Westland. Snow flurries to low levels in the morning then lifting to 300 to 400m in the afternoon.

Mostly sunny about Nelson and Marlborough with southwest breezes. Canterbury has a mainly sunny morning with light winds, southwesterlies pick up in the afternoon bringing some cloud and the risk of a shower mainly out on Banks Peninsula, cloud and any coastal showers start to clear away in the evening.

Southland and Otago sees rain / showers all day long, finally easing in the evening. Some small hail at times and possible sleet, snow to low levels in the morning (100 to 200m) then lifting to 300 to 400m in the afternoon. Strong cold southwesterlies gale about the coast, easing evening inland.