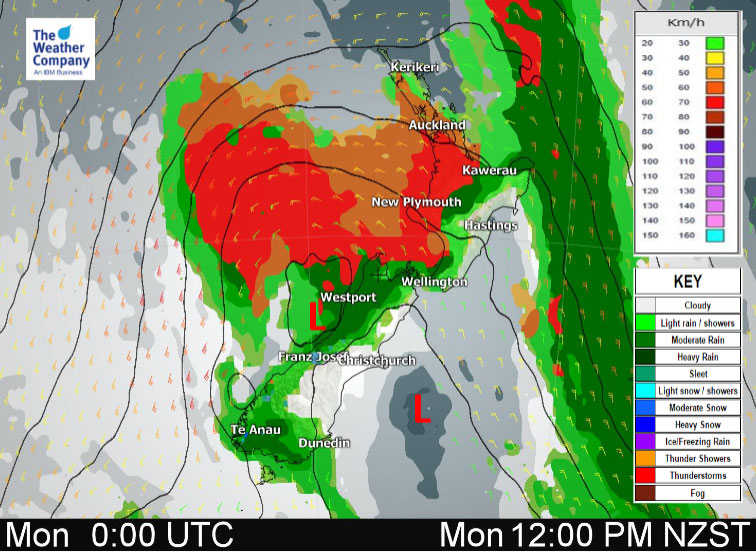 A front moves off to the northeast of the North Island on Monday morning leaving an unstable airflow in its wake, meanwhile southerlies develop about Southland early morning pushing northwards to reach Marlborough later in the evening.

It’s looking to be a showery day for the western North Island tomorrow, showers may be heavy with an isolated thunderstorm in the afternoon, easing for a time then later in the evening another band moves bringing a risk of further thunderstorms and this time possibly some hail. Expect heavy rain in the morning for eastern Bay Of Plenty, East Cape / Gisborne then easing in the afternoon. Sunny spells for Hawkes Bay and Wairarapa, the odd spot of rain or shower may spread from the west at times.

Expect a showery day for the West Coast of the South Island and Nelson, during the afternoon / evening showers may become heavier for Buller and perhaps Nelson with a risk of hail / thunder. Jet may finally get a few thunderstorms 🙂 Sunny areas for Marlborough, showers for the Sounds then rain moves in during the evening (especially southern Marlborough) as southerlies start to ramp up. Sunny areas and high cloud for Canterbury, light winds tend to the southwest in the afternoon then showers develop late afternoon. Rain gradually sets in about inland areas into the night, North Canterbury (especially inland) and the Kaikoura area sees rain become heavy.

Rain develops about Southland in the morning then easing to showers as southerlies freshen, showers make their way into Otago during the afternoon then easing evening. Overnight another burst of showers moves into Southland, short sharp heavy showers with small hail and some lightning is possible. Snow overnight to 500m about Southland.

Temperatures getting into the late teens or early twenties about Canterbury / Marlborough and much of the North Island, the Central Plateau stays in the mid teens however. The warmest temperatures will be in the east and about Northland / Auckland. High’s in the low to mid teens across the rest of the South Island.

Not sure unless there’s a report somewhere, haven’t heard about anything at this point.

lol i cracked up when you mentioned jet. hes been bugging you and buggging you.

i reakon we might have some thunder anout tommorow. today was awesome with the heavy rain fall

u guys are the best but oi am in hallfax

yay . looking foward for some possible storms tommorow. i know just a risk but its been tooo long. had some good rain today