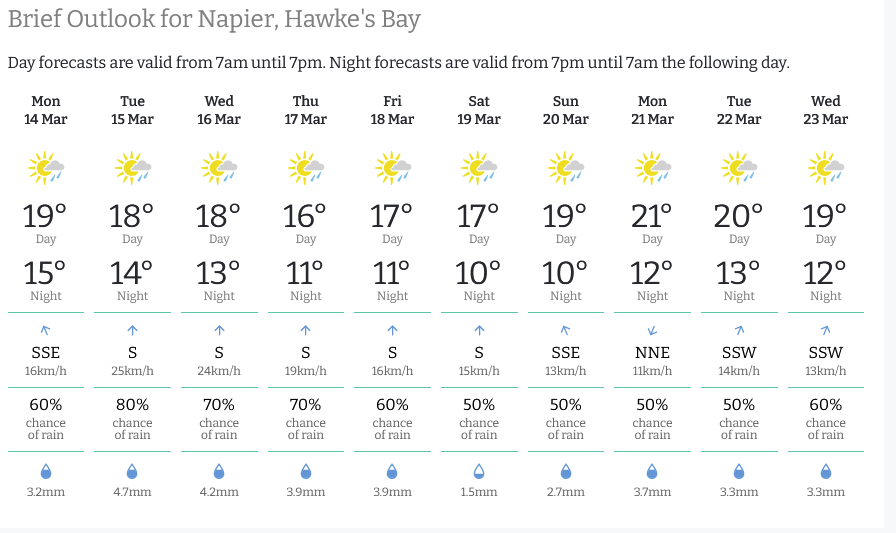 LOW MAY NOT HAVE AS MUCH IMPACT THIS WEEK

Late last week we talked about the possibility of a low bringing an extended period of rain to the east coast of the North Island this week. While there is still a low lurking to our northeast it doesn’t come all that close by the looks of things now so showers rather than rain is looking more likely. Below is a snapshot from ruralweather.co.nz of Napier, no heavy rain in store looking 10 days out but a continuous pitter pat of showers instead.

CHANCE OF AN ISOLATED SHOWER THIS AFTERNOON?

Some low level instability should lead to a few isolated showers about inland hills and ranges of the lower South Island this afternoon. Once we get to between 3000 – 4000m high up there is an inversion (warming of the atmosphere) which prevents clouds growing taller, thunderstorms need about double the mentioned heights to occur.

A WARM AFTERNOON ON THE WAY FOR THE WESTERN NORTH ISLAND

Temperatures for the western North Island are very pleasant this afternoon reaching into the mid twenties for Waikato up through to Northland. Hamilton has a high of 27 degrees. The South Island is not as warm but inland Buller (Reefton) and parts of Central Otago reach 24. Tomorrow we see a cool down for the South Island in the south and eventually up the east coast also as southerlies move northwards thanks to a cold front. Invercargill will likely only reach 13 meanwhile Reefton will have another great day reaching 25 degrees.