Monday’s national forecast – fairly settled ahead of the next front 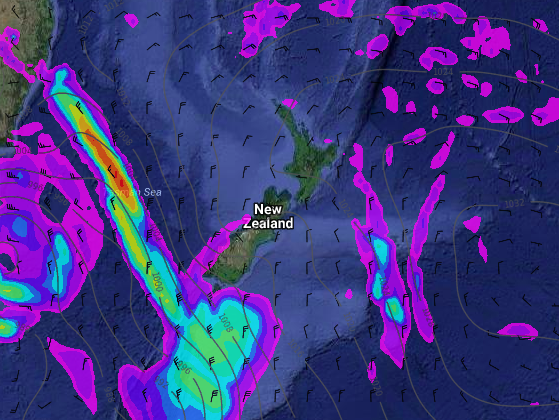 An active cold front that brought localised downpours and thunder to some parts of the North Island at the weekend is today tracking eastwards slowly away from New Zealand out to sea.

Behind it is a brief pause in the weather before a cold front and new low move in to the South Island area on Tuesday.

NORTH ISLAND:
Becoming mostly dry over the entire North Island, a few remaining isolated showers possible mostly from Northland to Bay of Plenty/East Cape. Winds are light from the northerly quarter. A warm day for many.
Highs: 19 to 25

SOUTH ISLAND:
Northerly quarter winds build, especially through the mountains and to the south. A mostly sunny and dry day but clouds build later in the south and west and showers move in to the lower half of the West Coast. Warm and fairly sunny in Southland and Otago.
Highs: 19 to 24