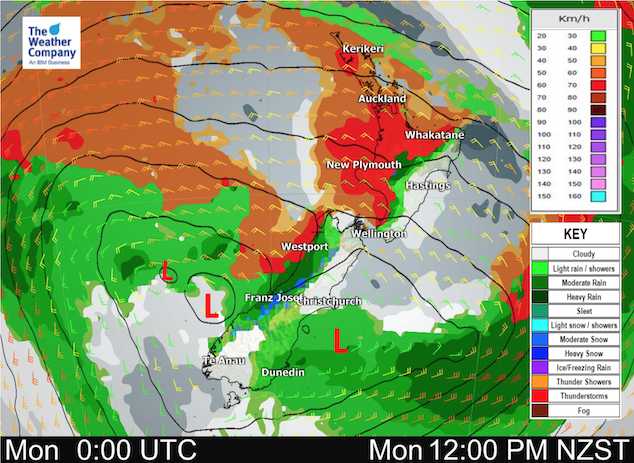 Expect unsettled conditions for New Zealand today due to a couple of low pressure systems centred either side of the South Island.

For the western North Island expect showers for much of the day, showers may be heavy at times with a risk of hail / thunder especially this afternoon. For the east coast expect morning showers then mostly clearing with sun breaking through, there is the chance a shower or two may still spread over from the west at times otherwise mainly dry for the rest of the day. Expect west to northwesterly winds for all.

Rain this morning for the West Coast eases to showers, clearing in the afternoon about South Westland, some sun may even break through. About North Westland and Buller rain or showers continue then easing / clearing later in the evening. Morning rain about Nelson eases to showers and sunny spells, morning rain for Marlborough clears then mostly sunny.

Morning rain for Canterbury then becoming restricted to Banks Peninsula southwards from afternoon especially nearer the coast with inland spots drying out. Further north into North Canterbury some sun may break through after midday. Winds pick up from the southwest. The odd shower for Otago then turning to rain about the coast from afternoon, especially for northern Otago. Southland has some sun then cloud thickens up from afternoon and a shower or two works their way in by evening.