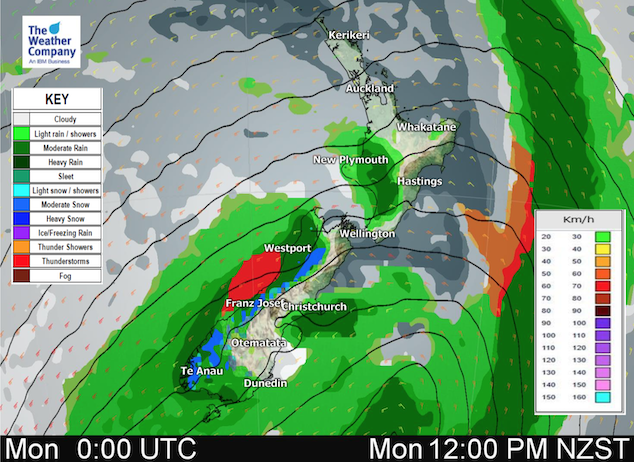 A series of cold fronts push over New Zealand today in a cold west to southwesterly airflow.

Early rain for most of the upper / western North Island then easing to showers and strong westerly winds, winds may gust to gale at times about western coastlines and especially Auckland from afternoon. Morning spots of rain clear in the east then expect some sun as northerlies change breezy westerly. Northwesterlies through Cook Strait and about Wellington / Wairarapa will be strong to gale force.

Rain or showers for the West Coast, Southland and Otago, heavy at times with hail and possible thunderstorms (thunder more likely for the West Coast). Winds mostly strong from the west or southwest, gales at times right on coastal fringes. Dry at first for Canterbury then a strong southwest change (gale force about the coast) moves through in the morning bringing showers, quickly clearing up for South Canterbury and winds ease. Showers then may become heavy in the afternoon with a risk of hail / thunder north of about Ashburton through to Amberley then easing at night.

Morning rain about Nelson and the Sounds eases to showers, morning rain / showers about the rest of Marlborough clearing then expect some afternoon sun. West to southwest winds, strong to gale about the outer Sounds.

Some snow will lower to 500m for Southland / Otago and gradually most of the West Coast by evening. The snow level lifts to 700m about the ranges of Nelson. Snow will most likely stay above 800m for the majority of Canterbury although the closer you get to the main divide the level drops a touch.

High’s in the late teens or early twenties for the upper North Island and down along the east coast, temperatures in the mid to late teens for other North Island regions. Highs in the mid teens for North Westland, Nelson, Marlborough and Canterbury. High single figures or low double figures for Otago, Southland and the remainder of the West Coast.