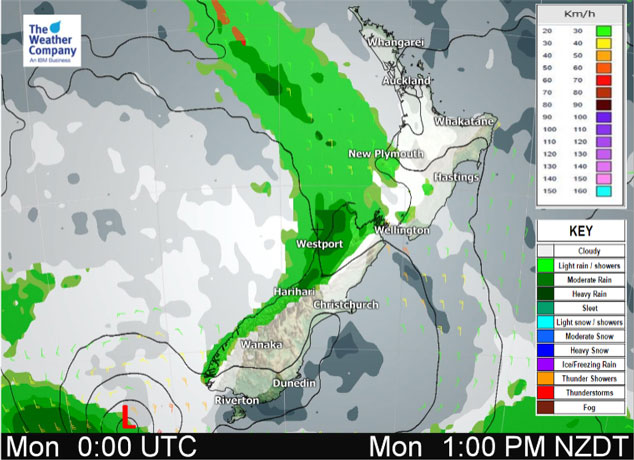 Ex TC Uesi weakens south of New Zealand today, meanwhile a light northerly airflow flows over the country moving around an anticyclone to the east of the North Island.

Sunny spells for Northland and Auckland, cloud may thicken up this afternoon. Waikato and Bay Of Plenty has cloudier skies, some morning drizzle possible for the Bay Of Plenty then an isolated shower possible inland late afternoon / evening. Winds are light, afternoon sea breezes. Mostly cloudy about the southwestern corner of the North Island (Taranaki to Wellington), some drizzle or a shower in the morning, northwesterly winds.  Mostly sunny along the east coast, some high cloud, afternoon sea breezes.

Cloudy for the West Coast and Nelson, showers ease during the day, rain north of Greymouth in the morning may be heavy then gradually easing. North to northeasterly winds. High cloud for Marlborough and North Canterbury, chance spot of rain mainly morning. Further south along the east coast morning high cloud breaks to a mostly sunny day, late afternoon cloud builds about Southland through to South Canterbury and there could be an isolated shower later in the day. Northerlies in the morning for the east coast then winds tend south to southeast after midday Banks Peninsula southwards.