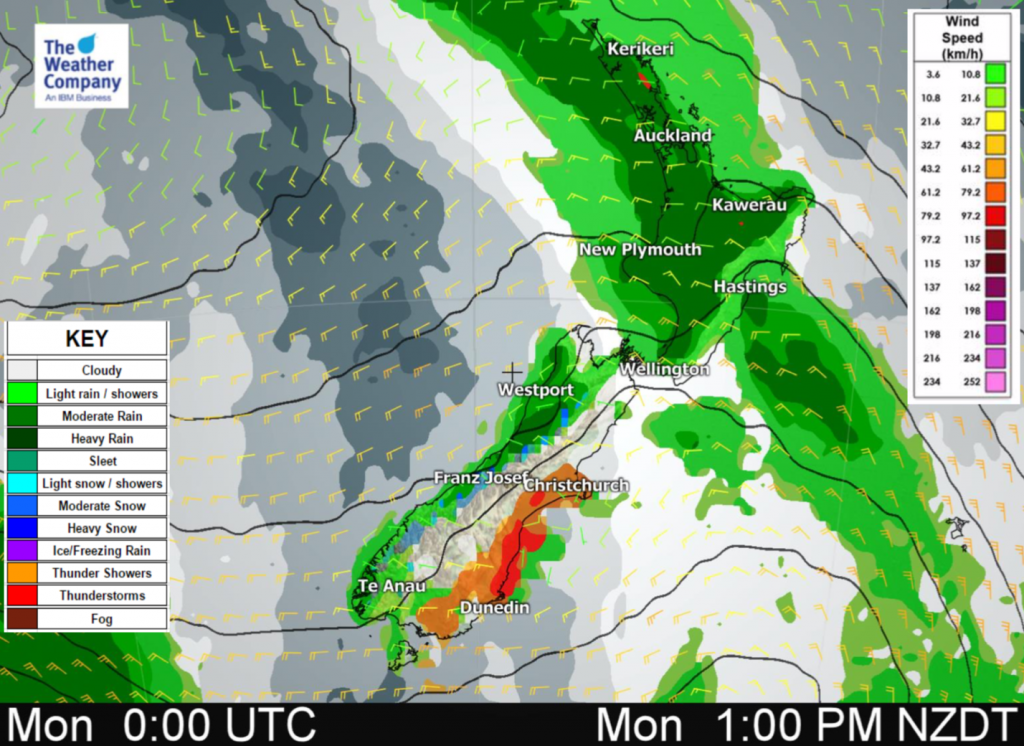 A series of cold fronts moves over New Zealand today bringing wet weather to most regions for a time.

Showers turn to rain this afternoon for the upper / western North Island then easing back to showers by evening and long dry periods developing. Northwesterlies change to the southwest around midday. High cloud in the east, scattered rain starts spreading from the west around midday then clears in the evening, winds from the northwest perhaps changing southwest for a brief time this afternoon.

Heavy rain this morning for the West Coast then easing to showers and some sun breaks through, winds from the west or southwest. Morning rain for Nelson, easing and clearing in the afternoon to sun with west to southwest winds. High cloud for Marlborough, some rain spreads from the west mid to late morning then clearing up in the afternoon and sun increasing as northwesterlies change westerly.

Dry at first for Canterbury then showers develop late morning, possibly heavy with thunderstorms and hail then clearing mid to late afternoon. Winds from the south then dying out mid afternoon. Early morning rain eases to the odd shower for Southland and Otago, some sun breaks through. Late morning showers enhance due to an upper level trough bringing isolated heavy falls (a chance of hail and thunder for coastal Otago). Conditions ease mid afternoon back to the odd shower which clears evening, winds from the west.

Highs in the late teens or early twenties from Northland down across to Gisborne / Hawkes Bay, temperatures in the mid to late teens elsewhere for the North Island. Highs ranging from 17 to 19 degrees for Nelson / Marlborough, mid to late teens for Otago and Canterbury. High’s from 12 through to 14 degrees for Southland and up along the West Coast.