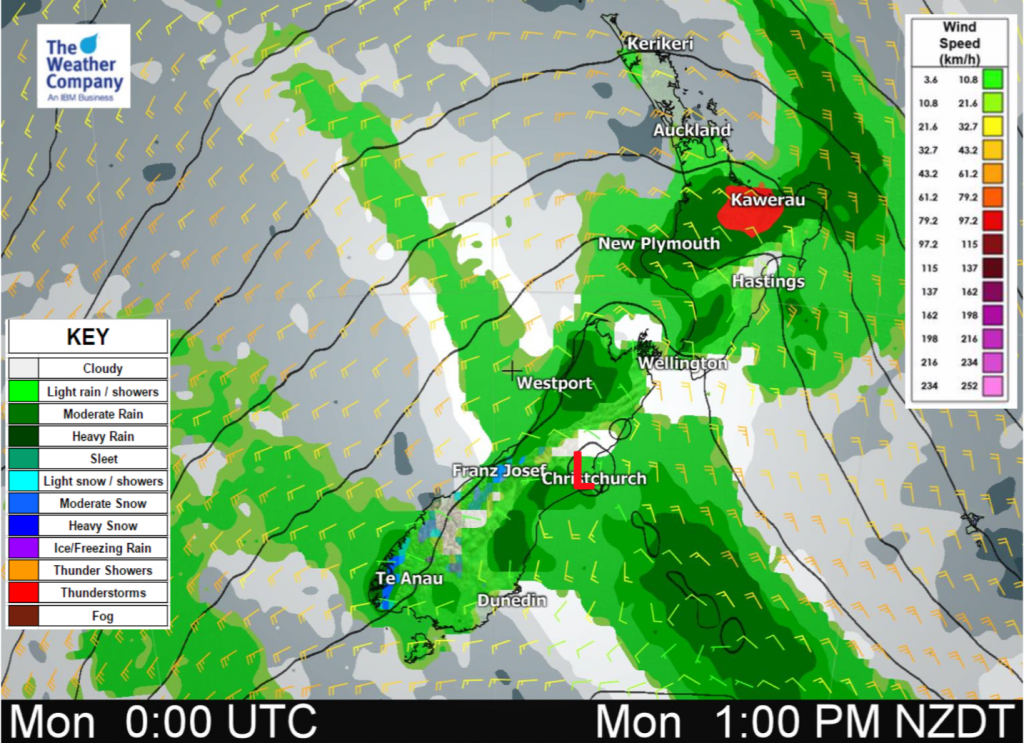 A series of cold fronts move over New Zealand today. The airflow is from the westerly quarter over the North Island while tilting more south to southwest for the South Island.

Expect a period of rain this morning for the upper North Island (Taranaki across to East Cape and northwards), heavy falls are possible with thunderstorms then easing to showers in the afternoon as northerly winds change gusty westerly. High cloud for the east coast with spots of rain at times from afternoon, clearing in the evening. Conditions may be dry to start about Kapiti and Wellington then a few showers move in around midday, northwesterlies tend westerly during the afternoon and freshen.

Heavy rain for the West Coast of the South Island eases to showers this morning as northerlies change southwest. Snow flurries lower to 500m by evening, 300m about Fiordland. Rain or showers about Nelson and Marlborough (Marlborough precipitation may be more in the form of spits), finally clearing in the evening as Northerlies tend southwest. Canterbury has high cloud, perhaps a few spots of rain. South to southwesterly winds freshen in the afternoon bringing showers, may be an isolated heavy fall before easing in the evening. Overnight a further band of rain moves through, more widespread with snow lowering to 300m.

Southland and Otago sees morning rain then showers, snow possible to 400m then lowering to 200 or maybe even 100m overnight. Rain forms about North Otago late afternoon / evening then eases overnight. Winds cold from the southwest.

Highs ranging from 17 to 20 degrees about Northland, Auckland, Hawkes Bay, Gisborne, North Canterbury and Marlborough. The coolest high temperatures will be about Southland, Otago, West Coast and South Canterbury with highs around 9 to 13 degrees.