Monday – what you need to know 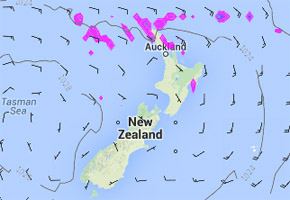 After such a dramatic headline one may think there could be something ominous on the way weather wise as we all head back to work, well not really. The end of this week could prove interesting with a potential tropical low eyeing the country up, but the start of it is a lot tamer in comparison.

Basically we have an anticyclone covering much of
New Zealand tomorrow meaning settled conditions, the airflow over the upper North Island is a gentle east to southeast breeze.

For the the South Island, the weather is expected to be mostly sunny with light winds on the West Coast and in Nelson; afternoon sea breezes develop. Along the east coast and
about Southland skies will be cloudier to start the day however sunny areas then
break through in the afternoon, light winds at first then once again sea breezes
for the afternoon.

For the North Island the weather will be mostly sunny in the west from Taranaki down through to Wellington, winds will be light and tending southerly or southeasterly. Along the east coast about Wairarapa and
Hawkes Bay, morning cloud breaks to sunny spells, winds light from the
south. For Gisborne cloud hangs around for much of the day with southerly winds,
there could even be a morning drizzle patch or two.

For the remainder of the North Island bar Northland, expect mostly sunny weather with light winds at first then
afternoon sea breezes. There is the chance of a late afternoon isolated shower
for some otherwise mainly dry conditions prevail. About Northland winds will be
from the southeast for much of the day with sunny spells and some cloud, cloud
more persistent along the east coast and there may even be a light shower or two
at times.