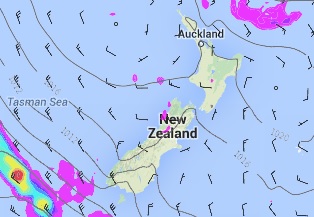 The weather across New Zealand is looking mainly settled and sunny tomorrow as a high pressure system with two centres sits either side of the North Island.

For the upper North Island expect mostly sunny weather with light winds, afternoon sea breezes for coastal areas. There is the low risk of an isolated shower about some inland hills and ranges but most can look forward to a dry day. Temperatures in the high teens or early 20â€™s.

About the lower North Island expect mostly sunny weather also with gentle westerlies along the west coast. Wellington sees northerly winds and northeasterlies flow along the east coast. Temperatures in the high teens for most although Wellington with the northerly gets to 16 degrees.

The upper South Island has mostly sunny weather with warm temperatures and light winds for most, the West Coast however sees slightly cloudier conditions with the odd shower possible. North to northwesterly winds blow across the lower South Island, mostly sunny however in the west some cloud may deliver the odd light shower once again.

So the weather is shaping up to be pretty good to start tomorrow and in general stays that way for most of the week, not all regions will have a blemish free week though and for more details on that be sure to catch our 7am story tomorrow morning which discusses the outlook for Monday to Friday.