Monday & Tuesday’s colder change for some parts of NZ 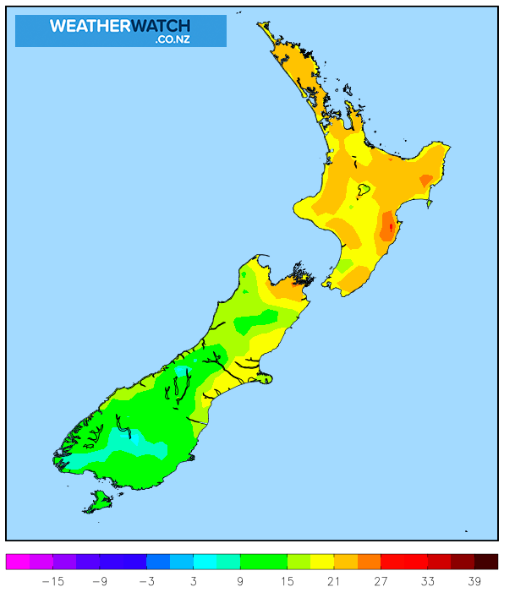 Each week now we’re seeing a southerly with a burst of colder air – that happens again on Monday, in true Autumn style.

Daytime highs take a big drop on Monday, some by as much as 10 degrees from Sunday.

The colder winds are being generated by the same high pressure system over Tasmania that will also be affecting the tropical cyclone moving down from the north west on Tuesday. This powerful high pressure system will guide if the cyclone hits the top of NZ or pushes it out to sea – this same high, with its anticlockwise flow, pushes up a southerly flow over New Zealand on Monday and Tuesday.

Coldest air will be in the south and east of both islands and fades out around the middle part of the North Island on Tuesday – as the cyclone to the north is pushing by.

Overnight lows drop as well, with a chance of some light frosts in some sheltered inland areas – see your specific local hourly temperature forecasts for more granular details.

Here are some examples:

We now have NEW MAPS which cover Maximum and Minimum Temperatures over the next 72 hours. You can find these here: www.weatherwatch.co.nz/maps-radars/temperature/maximum-temperature