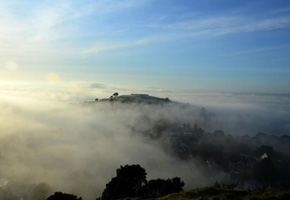 A low pressure system brews out to the west of the country moving ever so slightly closer overnight, a few showers move into the far north. Cloud will gradually start to increase for most regions later in the night or towards dawn tomorrow. Still, this period of calm could lead to more fog overnight for some.

Northland, Auckland, Waikato
Clear spells and some cloud with light winds tending northerly or northeast, a few showers slip down over Northland mainly out east later this evening and towards eastern Auckland / Coromandel around dawn tomorrow. A few areas of fog could develop about Auckland and the Waikato overnight also.
Lows: 7-10