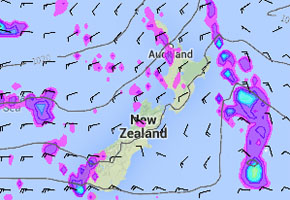 A west to southwest airflow lies over the country tonight, a few places see showers clear this evening or are dry alltogether tonight. About Auckland through to Northland however the odd shower may continue through the night, especially for a time later this evening.

Eastern North Island
A few showers move through this evening with a southwest change then clear before midnight. Clear skies for the rest of the night with light winds.
Low tonight: 6

Wellington
Chance of a shower early this evening then clearing, expect clear spells with areas of cloud for the rest of the night. Southerly winds.
Low tonight: 7-8

Marlborough
Remaining showers, a few of which may be heavy clear this evening then expect skies to becoming mainly clear. Light winds.
Low tonight: 4

Canterbury
Cloudy areas inland spreading to the coast this evening, light winds. Isolated showers a few of which may be heavy near the foothills gradually clear this evening.
Low tonight: 2-3

Southland & Central Otago
West to northwest breezes with some cloud. A few brief showers possible about the Southland coastline this evening.
Lows tonight: 3-6