Monday mainly settled, a cold start for some 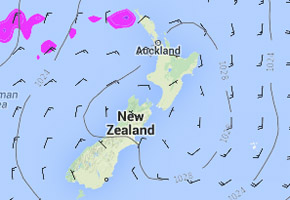 Monday is looking like a mainly settled day for New Zealand due to the presence of an anticyclone sitting over the country for most of the day. First of all this means a cold start will be on the cards tomorrow morning for many, second of all this anticyclone isnâ€™t hanging around too long as a northerly airflow develops over the South Island later in the day. The anticycloneâ€™s centre moves to lie east of the country at night spreading a ridge back onto the North Island.

For the upper North Island expect a light northeasterly airflow, a mix of sunny spells and increasing cloud for Northland and Auckland. Eastern Northland sees the odd light shower from midday, the tip of Northland will
likely see cloudy skies and showers for much of the day, rain possible at times
too.

The Waikato and Bay Of Plenty sees light winds for much of the day
with sunny weather (far western parts of Bay Of Plenty may see areas of cloud
however), a cold start for inland areas. For the lower North Island expect a
sunny day with light winds for most, the only exception being Gisborne
northwards. This part of the country could see periods of cloud and the odd
light shower.

The South Island is a tale of two halves as it has been many times before, due to the impending northerly airflow which mainly moves in during the second half of the day the West Coast is expected to be mostly cloudy
from morning.  The odd drizzle patch possible from evening. Out east from Nelson
down through to Southland expect sunny conditions all day with light winds, a
frosty start likely for many.

Temperatures not looking overly warm but not too bad considering we have just passed the shortest day of the year. Temperatures sitting in the low double figure mark for many, once one gets
around the Waikato area and northwards highs in the mid teens look more likely.
Auckland northwards may see temperatures around 17 to 18 degrees.