Monday – Livened up for some 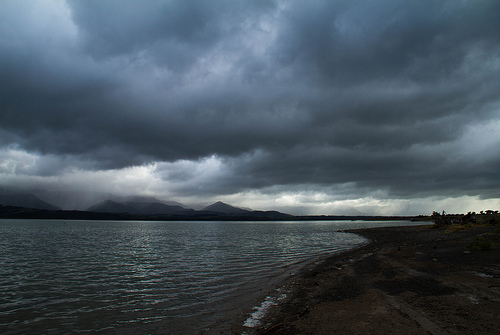 Monday showed itself to deliver a bit of everything with reports of very high temperatures, thunder and hail plus sunshine and windy conditions.

Heat prevailed over Napier and Gisborne with the mercury climbing into the low thirties although we’re hearing Napier has cooled a little since.
The Wanganui region saw thunderstorms and there were reports of hail.Temperatures also dropped fairly quickly as a result.

Parts of Nelson and Marlborough have also seen severe thunderstorm warnings issued by the MetService late this afternoon.

Comments keep pouring into WeatherWatch as evening approaches about conditions across the country.

Pete mentioned “Yep, big thunderstorms in Wanganui now” and another comment came in about conditions but remaining mostly dry “I’m in between the turakina/mangamahu valleys and we’ve had 1mm or less and intermittent powercuts. I can hear thunder storms passing over wanganui.

“Hasn’t stopped raining since last night here in rolleston/chch, got pretty heavy at times too” said Aimee and good news finally for the scorched Wairarapa according to Michelle..”got rain in masterton. Bout time to.”

Rain totals weren’t quite so obvious in Auckland today said James..”Very light and occasional drizzle here in Auckland Central.” whereas Francie had brighter news..”lovely rain in featherston…music to our ears!!”

Another Cantabrian, Helen was over the moon with the weather..”Started raining at 8pm last night and hasn’t stopped since – it’s wonderful! (inland mid-Canterbury/Sheffield) and Rangiora wasn’t missing out “Grey and showery here in Rangiora, it is FABULOUS to see it.” said Beth.

Tash got in touch and posted..”Showers on and off in Matamata. Wind has picked up, some good gusts coming through.”

Kelli said “We had a few big fat raindrops fall a lil while ago here in Hastings and I thought YES! Sadly no, that was it for the moment.”

Janet put it simply..”Raining good in wanganui now” and Kevin said much the same but was a little more creative..”Just went outside and took my shirt off.Never thought I’d see rain again”.
WeatherWatch wondered if Kevin should have taken pics but has now decided against asking!

Jess said with tongue in cheek “Poured down yesterday. Anymore and it will kill the small sproutings we have”.

Thanks for all your reports and it’s refreshing to see that some moisture has fallen over some areas as long as it doesn’t get too boisterous.

Tonight could be interesting for some western North Island areas and eastern parts should see rain or showers settle in for a time if it hasn’t done already.