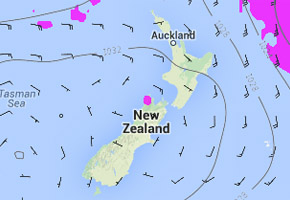 The start of next week and in fact most of next week is looking rather settled due to an anticyclone that hangs over or near New Zealand from Monday through to next weekend.

For the North Island tomorrow expect mostly sunny weather for all western regions, winds will be light tending easterly or southeast. About Northland expect a few clouds now and then, perhaps even a light shower in the east.

Wellington and along the east coast has a light southerly airflow, the morning starts off a little cloudy with the chance of a drizzle patch then into the afternoon sunny spells break through.

Then onto the South Island, mostly sunny weather for all with light winds although there could
be areas of cloud for coastal parts at times. Easterlies may pick up in the
afternoon along the east coast.