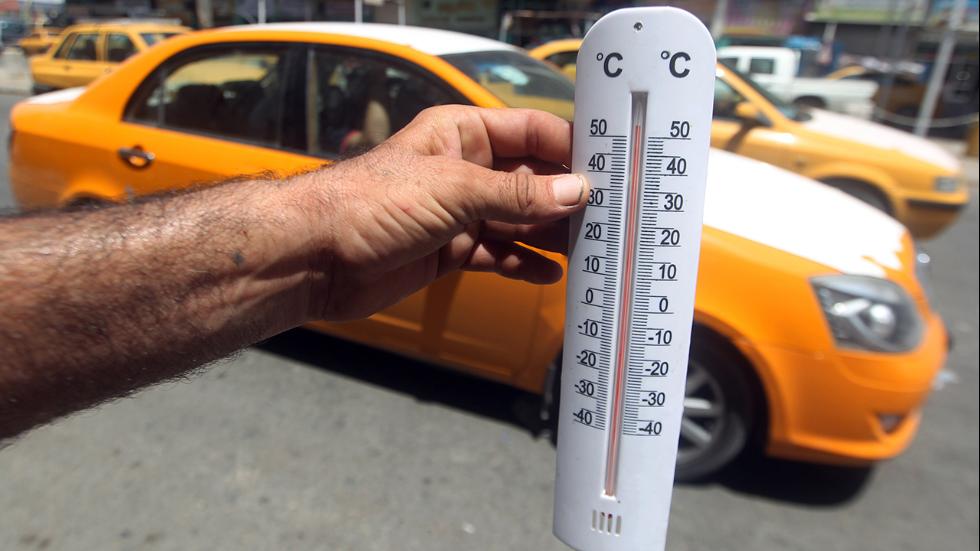 Even in the Middle East, where scorching heat is part of everyday life during the summer, coping with extreme temperatures has its limits. A heat wave that has been building for days is testing those limits â€“ and will test the region’s national temperature records too.

The searing heat has led to an impromptu, mandatory four-day holiday in Iraq beginning this past Thursday.

The government has urged residents to stay out of the sun and drink plenty of water, but for many of the more than 3 million Iraqis displaced by violent conflict, that poses a dilemma.

Official weather observations including sky cover, temperature, humidity and winds for Iraq, Kuwait, western Iran and nearby areas.
Chronic electricity and water cuts in Iraq and other conflict-ridden countries make heat waves like the present one even more unbearable â€“ particularly for the more than 14 million people displaced by violence across the region. In the southern Iraqi city of Basrah earlier this month, protesters clashed with police as they demonstrated for better power services, leaving one person dead.

Unlike other countries in the region, Iraq lacks beaches and travel restrictions make it difficult for people to escape the sweltering heat, leaving many – even those fortunate enough to live in their homes – with limited options for cooling off. Some swim in rivers and irrigation canals, while others spend these days in air-conditioned shopping malls.

The heat index combines temperature and humidity to estimate what the air feels like to humans.
To the south, in the similarly sweltering Persian Gulf region, residents cranked up their air conditioners, and elsewhere in the Middle East, those who could headed to the beach to escape Thursday’s soaring temperatures, high even by the standards of the region.

Water temperatures in the Persian Gulf routinely warm into the 90s each summer, releasing massive amounts of water vapor into the air above. For those unlucky enough to catch a breeze from the Gulf, the humidity can be stifling.

It was even hotter on Friday at the Mahshahr Airport when temperatures reached 114.8 degrees at 4:30 pm local time with a dew point of 89.6 degrees, leading to a heat index value of an incredible 163 degrees (72.7 degrees Celsius).

It is not uncommon for well-off Gulf citizens to decamp with their luxury cars and servants to cooler spots such as Britain or Switzerland as temperatures rise. Saudi Arabia’s King Salman, joined by a delegation numbering in the hundreds, is currently cooling off in the south of France, where high temperatures Thursday were in a comparatively mild range between 73 and 93 degrees (23 and 33 degrees Celsius).

Several Gulf states, including the United Arab Emirates, Qatar and Saudi Arabia, mandate midday breaks when temperatures are at their highest for low-paid migrant laborers during the summer months. But that only provides some relief as many still spend long hours working in the heat and travel to job sites on buses without air conditioning.

Forecast highs for the next three days. Color shading on the map reflects highs for the third day indicated on the city plots.
A Filipino migrant rights activist collapsed and later died of apparent heat stroke during a visit to his country’s consulate in Dubai this week. Highs over the past week have hovered near 113 degrees (45 degrees Celsius) in Dubai, and the Dubai area has not reported a temperature below 90 degrees (32 degrees Celsius) even at night since July 24.

Another of the hottest spots in the Gulf was Kuwait City, where the official high Wednesday was 121.3 degrees (49.6 degrees Celsius). The civil aviation authority’s meteorological department forecast daytime conditions as “very hot” and overnight temperatures as “relatively hot,” with moderate winds providing little relief.

Kuwaitis nonetheless took it in stride.

Nazem al-Ghabra, 31, who works in corporate communications, told the Associated Press: “We’re used to this weather, and Kuwait is well-equipped for this harsh weather as almost everything is indoors, even car parking.”

While Kuwait may be well-equipped for heat, this episode promises to be among the more extreme in modern recordkeeping.

According to Herrera, the national heat records for both Iraq and Iran are both 53.0 degrees Celsius (127.4 degrees Fahrenheit) set in a heat wave at this time of year in 2011. (In Iran the record was tied in August 2014.)

The World Meteorological Organization says the official record-high temperature for Asia, of which the Middle East is a part, is 129 degrees (54 degrees Celsius) set at Tivat Tsvi, Israel, on June 21, 1942. Herrera says this record is unreliable and lists the 2012 Kuwait record as Asia’s record.