Mexico/Texas brace for soon to be hurricane 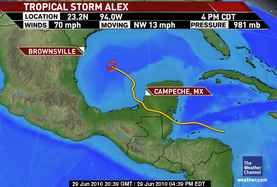 Tropical Storm Alex is on the verge of becoming the first hurricane of the season. As of 4 pm CDT Tuesday Alex was located about several hundred kilometres southeast of Brownsville, Texas with top winds of 110km/h.

Alex is moving at a stead speed toward the northwest. This motion should continue with a slow turn toward the west-northwest anticipated Wednesday.

Out ahead of Alex, tropical storm conditions should start in the warning areas by Wednesday morning so finish preparations tonight if possible. Further strengthening is likely as Alex moves over the very warm water in the Bay of Campeche and southwestern Gulf.

Atmospheric conditions also favor strengthening with very little wind shear and excellent outflow due to a large ridge of high pressure over the cyclone.

On its current forecast track Alex should make landfall sometime later Wednesday afternoon or early Wednesday evening, just south of the Rio Grande in northeast Mexico. At that time Alex will be at least a category-1 hurricane.

Increasing south-to-southeast winds along the central and western Gulf coast continue to cause some coastal flooding at high tide.

Wednesday into Thursday morning, expect damaging winds in the warning area. Also, on the north side of Alex’s track, a possible near 2 metre storm surge will be accompanied by high waves.

It remains quiet over the rest of the Atlantic Basin.

– Weather.com for the latest videos