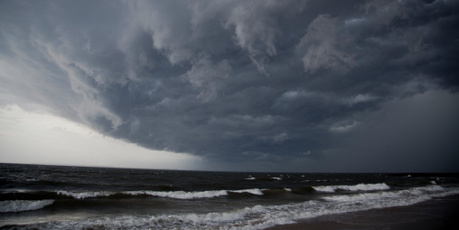 At least nine people were killed when Tropical Storm Manuel hit the Pacific coastal state of Guerrero, including a group of six tourists from Mexico City who died in a highway accident Saturday as the storm struck, Mexico’s state-run Notimex news agency said.

And flooding and mudslides caused by Hurricane Ingrid’s rains killed at least six people in the states of Hidalgo and Puebla, Notimex said. Three people were killed when rains swept away the vehicle they were riding in, Notimex said Saturday. And three others were killed when a mudslide buried a house.

Forecasters said the Category 1 hurricane, packing maximum sustained winds of 75 mph, is expected to make landfall Monday morning and could strengthen slightly before it hits.

But even as Ingrid churned in the Gulf of Mexico, the storm system was already dumping heavy rains on parts of Mexico.

Notimex reported damaged and collapsed roads and flooded homes. It said authorities evacuated residents in danger areas, taking them to one of more than 50 shelters in the region.

Emergency crews distributed supplies in boats to areas unreachable by land. Riverside towns were stranded after the water rose to critical levels.

The National Hurricane Center in the United States warned Ingrid could dump 10 to 15 inches of rain over Mexico’s eastern region, with 25 inches expected in mountainous areas. The rainfall would mean flash floods and mudslides for saturated areas.

Along the coast, the center predicted a “dangerous storm surge” and “destructive waves.”
Ingrid is the second hurricane of the 2013 season in the Atlantic region, the center said.