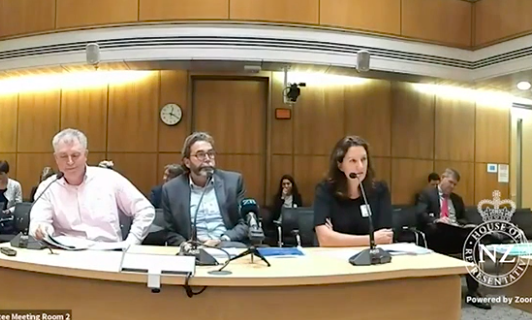 By Jamie Morton, Science Reporter, NZherald — Niwa and MetService have faced a fresh grilling from MPs over why taxpayers are funding two weather forecasting units.

MetService, a state-owned enterprise, is New Zealand’s official weather forecasting service – but in recent years the Crown research agency Niwa has expanded into the area, setting up its own dedicated forecasting unit, Niwa Weather.

Private forecaster WeatherWatch has been calling on the Government to address the double-up and accused the two of running a “duopoly” over public weather data.

Both agencies â€“ which are being investigated by the Commerce Commission for possible anti-competitive behaviour â€“ today delivered their annual briefings to Parliament’s Economic Development, Science and Innovation select committee.

Both acknowledged there was “an overlap” in forecasting â€“ and it was also revealed their boards had recently met and made a “mutual commitment” to operate in a way that was best for the country.

Niwa had a focus on impacts from weather â€“ such as flooding, soil moisture and pastoral growth â€“ while MetService did an “outstanding job” in its role, he said.

Parmar, who is also National’s science spokesperson, replied: “So you are saying when it comes to forecasting weather, there is no duplication?”

Morgan said there would be “inevitably some” as both agencies began with the same information. He likened the situation to a car and a truck both being vehicles but each serving different purposes.

“It must cost quite a lot of money. Why are we doubling up on this? I would have thought you would have just linked and one would be using the other entity’s forecast, rather than doubling up,” Smith said.

“And it is doubling up. I know your explanations and I’ve listened to them, but it doesn’t satisfy me, quite frankly.”

Harris replied that Niwa was using the data to do its science anyway â€“ and he didn’t believe there was a “cost duplication”.

“I admit there is overlap, but I’m not actually seeing duplication that would warrant only providing one product to those who want to use it.”

“The reality is that we do some things that are similar and a lot of things that are very different,” Niwa boss John Morgan says of the agency’s relationship with MetService. Photo / File

Lennox also acknowledged an overlap â€“ but said the sources of information were different.

“We use a lot more models than Niwa do and we have many more forecasters who have the expertise to interpret those models, and therefore give to us a higher degree of definition of the weather that is coming,” he said.

People had a “freedom of choice”, he said, but MetService were still the national providers for weather.

“I agree, but it seems odd to have Government funding for two sets of weather forecasters,” Labour MP Deborah Russell responded.

Howard added that Niwa was coming from a science perspective, while MetService’s focus was on safety, and the two also differed with MetService forecasting over days to a week, and Niwa giving a longer-term outlook.

“Yes, there is going to be overlap, and as an organisation we are endeavouring to work with them as closely as we can, in understanding where those overlaps occur, and how we can best operate in terms of New Zealand Inc,” Howard said.

National’s Paul Goldsmith pressed further, asking what assurances could be given that what public investments were being made weren’t being duplicated, and that the relationship between Niwa and MetService was indeed collaborative.

Lennox described the relationship as friendly and collegial, and claimed the media had displayed it as “something different”.

He said the “rub comes when a CRI” was creating revenue and making profit, “and if there is a spill over from work that they do, then that overlaps with some of the work that we do.

“But we are a state-owned enterprise and therefore competitive, so we will take competition from anywhere, so long as it’s not subsidised.”

Earlier, the committee grilled Niwa over what access it gave other parties to its data â€“ and whether it had turned anyone down who asked for it.

Morgan said “99.5 per cent” of Niwa’s data was free to use, but the agency had sometimes said no to requests in cases where the data had been provided for Niwa’s own exclusive use.

Without naming WeatherWatch, he said he was aware of just one complaint.

Morgan was unable to give any update on the Commerce Commission investigation as Niwa hadn’t yet received its findings.

Afterward, WeatherWatch owner and head analyst Philip Duncan told the Herald he was “perplexed” at the responses to the committee â€“ especially those comments that the two forecasting units were giving Kiwis more choice.

“Then why stop at two? Why not 10? This is crazy. We don’t have two police forces, we don’t have two Radio New Zealands, but we’ve got two weather forecasters,” he said.

“I’m also quite confused that they’re both saying, yes, there’s a double-up, and yes, we’ve had a talk to each other behind closed doors to discuss how we will use taxpayers’ money.”

View the story via the Herald here

Interesting article! Nothing seems to change. They know they are doubling up & couldn’t care less it appears.