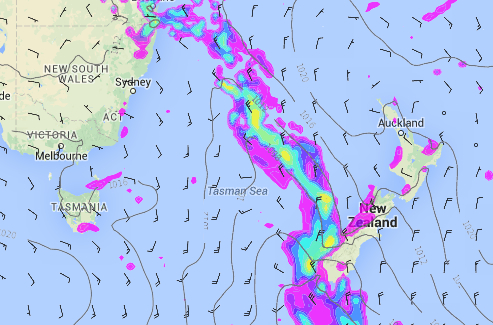 Wednesday is looking messy on the current satellite observations – with a front moving north through the day, and central New Zealand in for some heavy rain.

The East Coast of the North Island will start out dry at first, with high cloud and northwesterlies – while showers will come in about southern Hawkes Bay southwards.
In the evening, those southerlies will hit, bringing showers to most.

Some rain may become heavy for a time about the lower North Island in the afternoon after a largely fine start, then easing before evening.
“The lower North Island rain is looking less risky than the upper South Island, either way I think people will be fine and the rain will even be welcome mostly” says WeatherWatch analyst Aaron Wilkinson.

The southerly change heading into Wellington in the afternoon will be brisk to strong (gusting to gale is possible).

The aforementioned front will move its way northwards over the country, starting in the morning from the Tasman sea and merging with a low off the West Coast.
A cool southerly change will start out over the lower half of the South Island, before spreading further north.

Most places in the South Island can expect wet weather at some point during the day.
South Westland is in for some early showers, but these should clear and sunny weather along with breezy southeasterlies will take over.

Heavier rain is possible in the Tasman, with Nelson, Marlborough and Buller in for heavy showers in the morning – but these should ease towards afternoon.

Mainly trampers and anyone outdoors should be weary of the latest watches / warnings that are put out by weather services – so keep an eye on the latest maps and an ear on the radio.