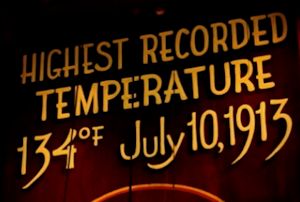 On 10 July 1913, a temperature of 56.7 C (134 F) was recorded at the Death Valley’s Greenland Ranch by Oscar Denton.  One historian said that Denton also recorded that day that it was so hot “swallows in full flight fell to the earth dead”.

This record-setting daytime high was not that much hotter than daily maximums recorded that week.  During a particularly harsh hot spell from 8 July to 14 July 1913, the afternoon highs reached at least 52.8 C (127 F).  Morning lows never fell below 29 C (85 F).

Death Valley is in the middle of the Mojave Desert in eastern California.  Mountains to the west wring out any moisture that tries to dampen the desert valley.  It’s also 58 meters below sea level, the lowest spot in the continental US.  Since air warms as it sinks, that little bit of an extra drop allows it to get extra hot.

But despite being a nearly century-old record, it’s the new world’s record because the old has been declared invalid.  This week, the WMO announced they were decertifying the old all-time hottest temperature of 57.8 C (136 F) recorded on 13 September 1922 in El Azizia, Libya.

The investigation that discredited the previous record was conducted with the support of the Libyan National Meteorological Centre for the WMO Commission of Climatology World Archive of Weather and Climate Extremes.

Several factors were cited in ruling the previous record as invalid, including:

Believe it or not, despite being in a desert, they are not immune to floods.

On 15 August 2004, torrential rain (at least by desert standards) flooded Death Valley National Park with water 2 to 3 metres deep.  The flood killed two people and washed out roads that then had to be closed for months.

The Death Valley record is also under suspicion. No reading above about 54F anywhere on the planet is considered as rock-solid.

This has been discussed in various forums in recent years – here is one recent set of comments:

Death Valley is only the hottest location in the continental US for the summer months – for the all-year average, Key West is a little ahead.