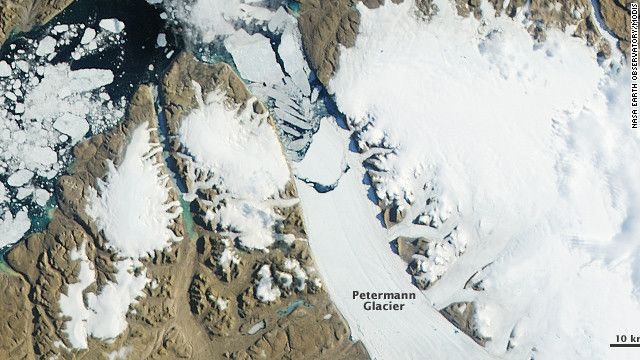 An island of ice twice the size of Manhattan broke off this week from a Greenland glacier, a University of Delaware researcher reports.

The 59-square-mile (150 square kilometers) iceberg is the second massive loss for the Petermann Glacier in two years, researcher Andreas Muenchow reports. In 2010, an ice island four times the size of Manhattan was lost from the glacier.

“While the size is not as spectacular as it was in 2010, the fact that it follows so closely to the 2010 event brings the glacier’s terminus to a location where it has not been for at least 150 years,” Muenchow says in a university press release.

The researcher says its too early to blame global warming for the loss of Greenland ice, however.

“Northwest Greenland and northeast Canada are warming more than five times faster than the rest of the world,” Muenchow says in the press release, “but the observed warming is not proof that the diminishing ice shelf is caused by this, because air temperatures have little effect on this glacier; ocean temperatures do, and our ocean temperature time series are only five to eight years long — too short to establish a robust warming signal.”

Muenchow says the massive chunk of ice is expected to eventually enter the Nares Strait between Greenland and Canada, where it will break up into smaller icebergs.

That could take a while. Pieces of the 2010 calving can still be found along the Canadian coast as far south as Labrador, Muenchow said.

Mmm, now let me see, when the ice at the end of a glacier reaches the sea, pressure builds up behind and something has to give, now let me think what may happen, Eureka I know, the ice at the end will break off due to the pressure built up behind and fall into the sea, yahoo, no need for an investigation to see if the air may have been 1 degree warmer than usual because it’s been proven it’s not.
Wow, and I didn’t need to have a scientific degree to sort that one out, and yes it was that simple to think through without a degree.in misleading the people – WAKE UP.