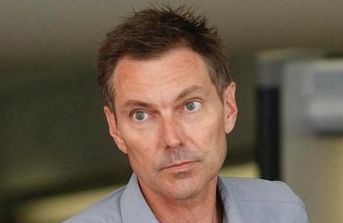 Broadcaster Martin Devlin has been escorted off a plane by police after it was diverted back to Wellington.

Witnesses said Devlin was “making a scene” and being “abusive” toward crew after the disruptions caused by fog.

The other passengers on the flight have just been let back on the plane this afternoon, but they say Devlin has not returned.

The flight, JQ262, which was originally due to arrive in Auckland at 9.25am before delays, circled the air for about an hour before returning to Wellington, said a Jetstar spokeswoman.

“We were expecting the fog to clear but unfortunately that didn’t happen so we had to go back to Wellington,” she said.

“We did arrange for police to meet the aircraft back to Wellington for that particular passenger, but it’s been a challenging morning.”

It was “standard procedure” and there were no injuries on the flight, she said.

He was “just the one” passenger who had caused trouble, she said.

Shouldve put him on a bus like anyone else,maybe he took a taxi instead.

Could it be the effects from the previous night and the expectations of another big day in AK?