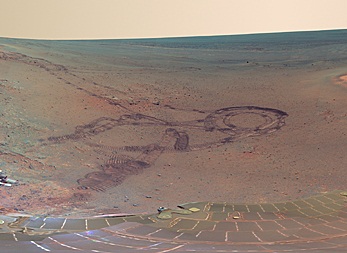 NASA has released a stunning panoramic image of the Martian landscape which it hailed as the “next best thing to being there”.

The image was compiled from 817 images taken between December 21, 2011, and May 8, 2012, while Mars rover Opportunity was stationed on an outcrop informally named Greeley Haven, on a segment of the rim of the ancient Endeavour Crater.

The scene, recorded from a mast-mounted colour camera on top of Opportunity, shows the rover’s own solar arrays and deck in the foreground, and fresh track marks from the rover’s exploration.

“The view provides rich geologic context for the detailed chemical and mineral work that the team did at Greeley Haven over the rover’s fifth Martian winter, as well as a spectacularly detailed view of the largest impact crater that we’ve driven to yet with either rover over the course of the mission,” said Jim Bell of Arizona State University, Tempe, Pancam lead scientist.

The crater spans 22 kilometres in diameter.

North is at the centre of the image, while south is at both ends.

The colours of the image has been altered to emphasise differences between materials in the scene, Nasa explained.

The release of the image comes shortly after Opportunity completed its 3000th Martian day the red planet on July 2.

Opportunity and its twin, Spirit, landed on Mars in January, 2004 for missions originally planned to last for three months.

Nasa’s next-generation Mars rover, Curiosity, is on course for landing on Mars next month.

Image is courtesy of NASA and can be found at photojournal.jpl.nasa.gov/catalog/PIA15689