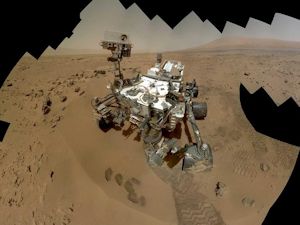 NASA has snapped its most amazing self-portrait yet of the Curiosity rover on Mars, showing the robot posing with its ultimate destination: a huge Martian mountain.

The new view of Curiosity on Mars is actually a mosaic of dozens of high-definition colour photos taken by the rover between Oct. 31 and Nov. 1. The image shows Curiosity surrounded by the tracks of its wheels, with the 5 kilometre-high Mount Sharp rising into the sky in the distance.

NASA featured the latest Curiosity portrait as its image of the day Thursday after releasing the photo earlier this month.

During its 84th and 85th days on Mars, Curiosity snapped this newest mosaic self-portrait.

The prominent Mount Sharp is the central peak of Curiosity’s vast Gale Crater landing site. Another mountain in the image, on the rover’s left, makes up the northern wall of the expansive crater.

To create the eye-popping Mars photo, Curiosity used its Mars Hand Lens Imager (MAHLI), a powerful camera mounted at the end of the rover’s robotic arm. Curiosity turned the camera on itself much like a human tourist might when traveling alone, snapping a series of photos that rover team members then stitched together into a high-definition composite view.

The rover had to move its robotic arm through more than 50 positions in a single day to capture its entire car-size body on camera.  NASA scientists used a test version of Curiosity on Earth to practice the Martian photo session.

NASA unveiled an earlier version of Curiosity portrait, composed out of 55 separate images, in early November, but the latest view includes significantly more detail and a wider view.

The Mars rover Curiosity is headed toward a spot near the base of Mount Sharp called Glenelg, and will continue to perform experiments along the way. The $2.5 billion rover’s primary mission is to determine if its Gale crater landing site could have ever supported primitive microbial life.