Maria prompts hurricane watch in Caribbean, Jose may threaten US this week 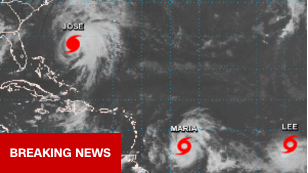 Tropical Storm Jose has strengthened back into a hurricane, according to the National Hurricane Center.

The storm, which could bring rain and wind to the northeastern United States later this week. It had maximum sustained winds of nearly 130km/h and was 885km/h southeast of Cape Hatteras, North Carolina, [Sunday night NZT], according to the hurricane center.
Jose remains out in the Atlantic Ocean and is moving toward the northwest, and that motion will bring it closer to the United States through the weekend. Just how far it moves west before turning to the north will tell forecasters a great deal about the likelihood of whether it will make landfall somewhere along the eastern US coastline.

The National Hurricane Center has included parts of the United States, from New Jersey up to New England, in its “cone of uncertainty,” which shows the probable track of the center of a storm over a five-day period. The cone includes the New Jersey coastline, Long Island, most of Connecticut and Massachusetts and all of Rhode Island.
A majority of the models keep the center of the storm over the ocean, including the major global models the GFS — the American forecast model — and the ECMWF — the European one.
Still, the proximity to land will likely bring strong gusting winds and rain to the Northeast, including New York City, by the middle of next week. In addition, tropical-storm-force winds could extend to North Carolina’s Outer Banks on Monday, the National Hurricane Center said.
The official forecast track from the hurricane center puts Jose as a strong tropical storm Wednesday 360kms southeast of New York. Coincidentally, the average track error for the forecast at five days is 360kms.
The forecast gives about a 1-in-4 chance of seeing tropical-storm-force winds — more than 62km/h — in the Mid-Atlantic and Northeast.
You can track the storm here.
– CNN International Weather. By Brandon Miller and Eric Levenson