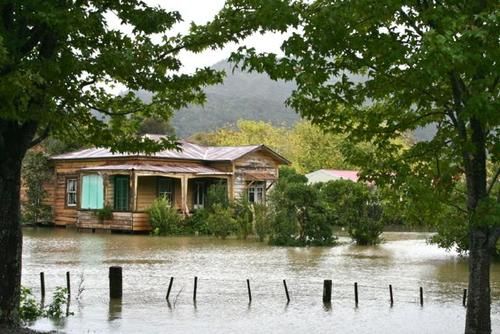 The cost of two storms which hammered parts of Wanganui and Taranaki has reached $6 million according to one major rural insurer, with that company alone handling more than 1250 claims.

In the days immediately after gale-force winds tore across South Taranaki and into Wanganui on March 3, insurance company FMG was inundated with 900 claims, initially estimated to cost $3.5 million.

But FMG chief executive Chris Black, said the final figure for his company had blown out to 1250 claims worth $5 million.

And Mr Black said the storm which belted the North Island on March 20 had added another $1 million to the claims bill although the bulk of those were outside the Wanganui-Taranaki regions.

“It’s been a tough couple of weeks,” he said.

“The first storm had the biggest impact from an area stretching from Hawera south to include Patea and Waverley.

“The second one (March 20) belted into parts of Taranaki north of Hawera and other parts of the North Island but largely left the South Taranaki area unscathed,” he said.

Mr Black said FMG dealt with about 45 per cent of all farm insurance across the country, and said about 600 of those 1250 claims in this region were for damaged farm buildings and 300 for dwellings. The damage ranged from complete destruction to roofs lost or windows blown out.

“The rest is for claims to damage of farm contents and loss of milk is included in that,” he said.

“Half of those claims needed to be assessed and our team has taken care of about 95 per cent of those,” he said.

Mr Black said it had been an difficult time for those hit by the bad weather.

“For many of them it’s been a emotionally tough time. I’ve visited a lot of them and it’s very hard for them,” he said.

“The upside is we’re into repair mode and indeed some of that work has been completed already.”

He said many pine plantations owners had been nurturing had “snapped like matchsticks” while other damage had come in the form of shelter belts being blown over and in a lot of cases wrecking fence lines.

“Repairing that sort of damage is long-haul stuff.”

Mr Black said FMG did insure forests but mostly against fire damage rather than storm damage.

“The other thing we find is a lot of property owners don’t think to insure their fences either.”

He said the storm emphasised a broader issue for farmers and property owners generally and that was the need to have contingency plans in place.

“Take dairy farmers. If you can’t milk because you’ve lost power then you need to have a Plan B and a Plan C in place. While communities may rally around and help out with generators, it goes well beyond just milking the cows.

“You’ve got to keep milk at the right temperature in the vats before the tanker comes and that requires a contingency plan on its own,” Mr Black said.

He said the storm had forced a number from dairy farmers to dump milk.

“A lot of those we’re working with don’t have cover for this type of business ‘interruption’ and they sometimes overlook other things like good maintenance.”

Mr Black said insurance was “a funny thing” with people often only understanding how important that cover was when disaster strikes.

“The impacts from these storms can last a long time and that’s why it’s so important for farmers to take care of maintenance, have contingency plans in place as well as a business ‘interruption’ plan,” he said.

“And it’s important that they constantly review that cover.”