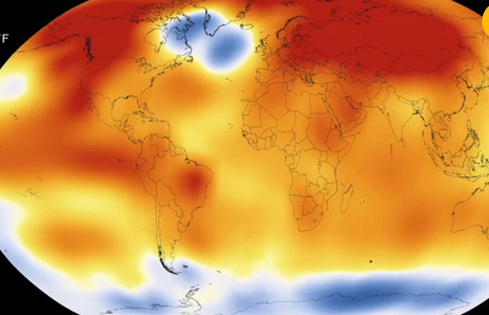 The global temperature in March has shattered a century-long record and by the greatest margin yet seen for any month.

February was far above the long-term average globally, driven largely by climate change, and was described by scientists as a “shocker” and signalling “a kind of climate emergency”. But data released by the Japan Meteorological Agency (JMA) shows that March was even hotter.

Compared with the 20th-century average, March was 1.07C hotter across the globe, according to the JMA figures, while February was 1.04C higher. The JMA measurements go back to 1891 and show that every one of the past 11 months has been the hottest ever recorded for that month.

Data released released later on Friday by Nasa confirmed last month was the hottest March on record, but the US agency’s data indicated February had seen the biggest margin. The Nasa data recorded March as 1.65C above the average from 1951-1980, while February was 1.71C higher.

The World Meteorological Organisation, the UN body for climate and weather, said the March data had “smashed” previous records.

Climate change is usually assessed over years and decades, but even scientists have been struck by the recent unprecedented temperatures. Furthermore, annual heat records have been also tumbling, with 2015 demolishing the record set in 2014 for the hottest year seen, in data stretching back to 1850.

The UK Met Office expects 2016 to set a new record, meaning the global temperature record is set to have been broken for three years in a row.

Prof Michael Mann, a climate scientist at Penn State University in the US, responded to the March data by saying: “Wow. I continue to be shocked by what we are seeing.” He said the world had now been hovering close to the threshold of “dangerous” warming for two months, something not seen before.

“The [new data] is a reminder of how perilously close we now are to permanently crossing into dangerous territory,” Mann said. “It underscores the urgency of reducing global carbon emissions.”

The Met Office, along with the US agencies Nasa and Noaa, keep the most-used global temperature records and will release their assessment of March temperatures later this month. But the JMA records have shown the same trends as these in the past.

The UN climate summit in Paris in December confirmed 2C as the danger limit for global warming which should not be passed. But it also agreed agreed to “pursue efforts” to limit warming to 1.5C, a target now looking highly optimistic.

A major El NiÃ±o weather event, the biggest since 1998, is boosting global temperatures. But scientists are agreed that global warming driven by humanity’s greenhouse gas emissions is the largest factor in the astonishing run of temperature records.

“While the current spike in global temperatures is getting a boost from El NiÃ±o, most of this anomalous warmth is a result of the ongoing human-caused global warming trend,” said Professor Stefan Rahmstorf, a climate scientist at Potsdam University in Germany.

Prof Adam Scaife, at the UK Met Office, said the run of record temperatures was set to continue, but that records would be less likely in 2017 as the impact of El NiÃ±o waned.

“While the El Nino is now decaying, it’s impact on global temperature tends to peak a few months later due to a delayed effect on the rest of the world’s oceans. This means that there is a high risk of record global temperatures over the next few months,” Scaife said. “Global temperatures are expected to continue to rise in future decades due to climate change, but El NiÃ±o may well [end] later this year, reducing the chance of record temperatures in 2017.”

The impact of the heat has been seen around the world and at the end of March scientists announced that the winter peak of the Arctic ice cap was the smallest ever recorded on records going back to 1979.