March: Plenty of high pressure for NZ, subtropics active too 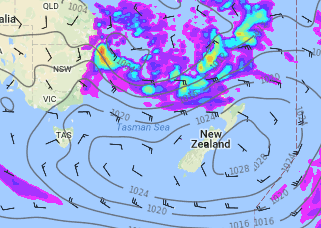 March is almost here and a lot of people are curious if the sudden rush of summer-like weather will continue on into the new month. Short answer: Yes. Below is the long answer:

The first day of March kicks off with a large high centred both to the east and west of the country – putting it firmly in control of New Zealand’s weather. This means light winds, sea and lake breezes and daytime cloud build-ups, producing the odd heavy downpour for the inland upper North Island (mostly Waikato and the BOP ranges).

The nights are getting longer so the light winds overnight will make for heavy dew in the mornings when you wake up – and slightly cooler mornings overall.

Over the remainder of the working week this week the high will combine to have one centre over the North Island allowing a slightly breezier westerly flow into the lower South Island and clouds into Southland.

By this weekend high pressure will be centred more-so over the Tasman Sea, this allows a slightly cooler, breezier and less humid sou’west flow across the nation. This flow will produce breezy winds from the south, south west and west (for the most part) across New Zealand.

By next Monday (March 6) a cold front looks set to move into the South Island while high pressure remains over the North Island (and winds pick up in Wellington).

But it’s the second week of March, kicking off from next Wednesday the 8th, which may see the next big weather pattern shift: High pressure remains centred over the South Island while the wet, humid, sub-tropics sink southwards over the North Island.  It’s too far out to lock in but the models are picking this sinking pressure, which they accurately picked a few weeks ago too (although did get it wrong that a deep tropical low would form – we got the huge tropical rains but not the wind or low pressure).

Certainly the sub-tropics are getting more active in the coming week or two – with Sydney and New South Wales facing day after to day of rain or heavy downpours with humid easterlies (the same easterlies expected to clip northern NZ).

So again in the second week of March there’s a chance for the North Island to be drenched by humid sub-tropical airflows slowed down by high pressure in the South Island. We’ll keep you posted on the long range models out of both Europe and the US – after we’ve monitored them for more days looking for trends or flaws in the data.

– Map / The current March 8 rain map (still a long way out, so may change some) shows a large high crossing the South Island as sub-tropical rainmakers slide further south into the North Island with a humid east to north east airflow / Weathermap