Make the most of the sun because… 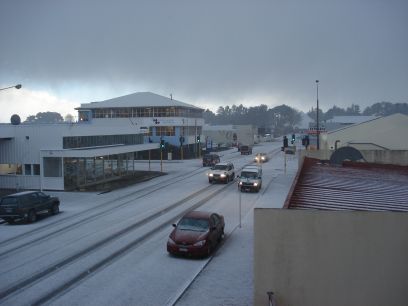 Make the most of the sun and light winds – that’s the word from WeatherWatch.co.nz’s weather analysts as another southerly moves towards New Zealand.

The cold snap is expected to be brief but very cold moving into Southland early tomorrow and then up the east coast to reach Wellington in the weekend.

The Weather Watch Centre says temperatures will be very low this weekend along the east coast from Wellington to Southland. Highs of around 6 or 7 degrees with wind chills closer to zero at times are expected over Saturday and Sunday.

However the rain and snow looks mostly confined to the hills and ranges of Southland and Otago.  While a few snow flakes and sleet are likely to sea level WeatherWatch.co.nz doesn’t believe it will be heavy as the air is simply too dry and the system is too fast moving.

Further north in Wellington and strong to near gale southerlies are again expected on Sunday.  Snow flakes to sea level aren’t expected but a very light dusting is possible on State Highway 2 on the Rimutaka Ranges over Saturday night.

The cold southerly change should spread up much of the country by Sunday however sunnier weather is expected to prevail in western and northern regions.

Early next week a low in the Tasman Sea may see a northerly flow over the country bringing rain later on Monday and into Tuesday for northern and western New Zealand.