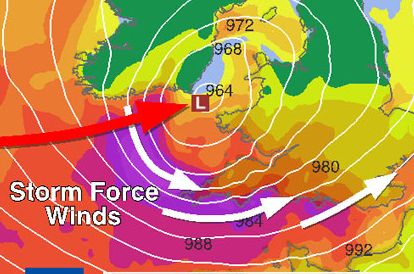 Forecasts remain fairly consistent with the track of the “St Jude storm” bringing the low pressure centre to the south of Ireland and approaching Wales by early morning on Monday (UK time, Monday PM NZT).

it will then move ENE across central England to the the North Sea during the day (Overnight Monday NZT).

Below shows the likely position 800kms to the SW of Ireland on Sunday, caught in the jet stream.

Ahead of the storm will be a large band of moderate to heavy rain so Sunday night will become very wet across southern and central Britain with as much as 30 to 60mm over SW England and Wales, the highest totals most likely in Wales. The persistent rain will then swing up across northern England during Monday morning.

The main feature will be the winds with a high risk of severe gales across southern England and South Wales in the morning, to the south of the low pressure centre, the high winds then extending across the Midlands and East Anglia from midday and early afternoon. At the peak early in the morning we may see storm force winds across Cornwall and southern Devon with peak gusts 130 to 150km/h around the coasts.

The severe gales then run along the Channel coasts through the morning with gusts of 130km/h.

Inland across central southern England to East Anglia gusts may reach 100 to 120km/h from late morning to early afternoon, and we may see similar gusts for a time over Wales and the central Midlands. The high winds easing quite quickly from the west by mid afternoon and the severe gales transferring to northern coasts of Holland and later Germany and Denmark. Scotland will miss the storm with light winds, although southern Scotland will see a spell of moderate to heavy rain.

DAMAGE
With many trees still in leaf in southern Britain these high winds may bring down trees and also cause some structural damage to roofs and chimneys. Batten down the hatches. Before the St Jude storm arrives, Sunday will also be a very blustery day with gusts over gale force across central to eastern England and Wales, and over 80km/h in exposed western areas.

The winds will ease down quite a bit for Tuesday and early Wednesday next week before increasing again late Wednesday with strong to locally gale force SSW winds in the NW Wednesday evening.

– Thanks to our friends at Weather.com for this extensive special coverage.

*WW App users will need to visit our website to view the images.

Hi weather watch please keep us updated I have close friends in the middle of it.