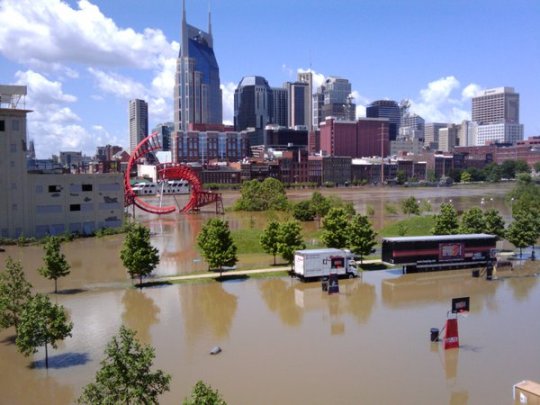 Officials in Nashville braced for more deaths as the flooded Cumberland River continued to swell, sending muddy water rushing through neighborhoods and threatening the historic heart of Music City after a destructive line of weekend storms killed 21 people in Tennessee, Mississippi and Kentucky.

Using motor boats and canoes, authorities and volunteers rescued scores of residents trapped in flooded homes, some which looked like islands surround by dark river water.

The downtown – home of a historic warehouse district that dates back to the 1800s and is now occupied by bars and restaurants – was nearly deserted after authorities evacuated residents and tourists. Floodwater spilled into some streets near the riverfront, and restaurants and bars in the warehouse district were closed.
A few blocks away, the historic Ryman Auditorium, longtime former home of the Grand Ole Opry, was in no immediate danger.
“It’s shocking to see it this way, but it was an incredible storm,” Mayor Karl Dean said as he surveyed the downtown flooding. The Cumberland River was expected to crest Monday afternoon at 11 feet above flood stage, and officials worried they may find more bodies in the rising floodwaters.

Thousands of people took refuge in emergency shelters, including about 1,500 guests at the Gaylord Opryland Resort and Convention Center who spent the night at a high school to escape the flooding. The resort’s hotel, located northeast of downtown along the river, had “significant water” inside and would remain closed indefinitely, said hotel spokeswoman Kim Keelor.

“We had just finished eating and suddenly they said: ‘Go! Go! Go!'” said Gerdi Bauerle, who was visiting from Munich. “And we said ‘Wait, we haven’t even paid.'”

Water flooded parking lots around the nearby Grand Ole Opry House and the Opry Mills shopping mall, but it wasn’t immediately clear if water had made it inside the buildings.

On the west side of Nashville, flood waters backed up from the Harpeth River had submerged hundreds of homes in the Bellevue suburb.

Lisa Blackmon, 45, stood on a street at edge of flood waters that swamped her neighborhood Monday. She had no flood insurance, and she lost her job at a trucking company last December. She feared she had nothing left in her home.

“I know God doesn’t give us more than we can take,” she said. “But I’m at my breaking point.”

Across from downtown on the east side of the river, LP Field, where the Tennessee Titans play also was threatened. Water covered one parking lot near the river but had not reached the stadium on Monday afternoon. At the Wild Horse Saloon, a popular country music hangout on the downtown riverfront, there was water in the loading dock area and the bottom floor.

The Cumberland flooded quickly after the weekend’s storms dumped more than 13 inches of rain in Nashville over two days. That nearly doubled the previous record of 6.68 inches of rain that fell in the wake of Hurricane Fredrick in 1979.

“That is an astonishing amount of rain in a 24- or 36-hour period,” Tennessee Gov. Phil Bredesen said Sunday.

The storms, which also spawned deadly tornadoes, killed at least 12 people in Tennessee, six in Mississippi and three in Kentucky.