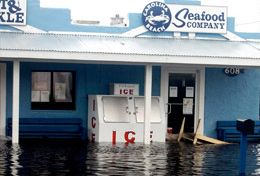 A flood warning remained in effect for northeastern North Carolina on Saturday as heavy rains left some businesses underwater and scores of roads closed.

Bertie County in North Carolina was the hardest hit with waters as high as stop signs in some areas. Most roads were closed or partially closed.

Click here to see CNN’s videos and photos of the flooding.

“A lot of people cannot get to their homes,” said County Manager Zee Lamb.

Rescue shelters were set up and animals in a small zoo were taken to higher ground.

“The county library is under 5 feet of water in the town of Windsor,” Lamb said. “You cannot get to the courthouse by road. I got here by boat today.”

Many businesses in the city are underwater, Lamb said, adding that the county has asked for state emergency assistance. Historic homes in the town were also damaged.

Townspeople were surprised by the extent of the flooding, according to the county manager.

The storm system dropped heavy rain in the Northeast part of the country as the remnants of Tropical Storm Nicole interacted with an upper-level low and a frontal boundary.

Boston was already feeling the effects, although the rain was expected to clear by Saturday morning.

Philadelphia and much of eastern and central Pennsylvania were deluged by rainfall and a motorist died after driving into floodwaters near Skippack Creek, state troopers said.

Troopers saw the vehicle floating near a golf course, but were unable to reach the female driver, who was later found dead.

Police said a 72-year-old woman was trapped for more than eight hours inside her car in Cumru Township before she escaped.

A weather-related accident Thursday claimed four lives in Washington County, North Carolina, where a Jeep Grand Cherokee hydroplaned and ended up in a ditch filled with water. Four of five people in the SUV drowned.

A 3-year-old survived and was hospitalized Friday, officials said.

Two motorists died in Dare County on Friday, and another was killed in Pamlico County, said Julia Jarema, spokeswoman for the North Carolina Division of Emergency Management.

About 150 roads in North Carolina were closed at some point and some people were evacuated in Bertie County, said Patty McQuillan, communications officer for the state’s Department of Crime Control and Public Safety.

Some areas in New York and Pennsylvania remained under a flood warning Saturday.