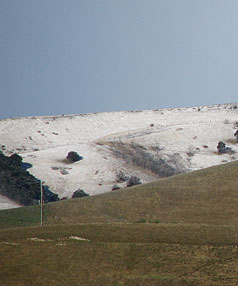 Temperatures plummeted over the mainland during much of yesterday and overnight as a front marched northwards seeing many people grabbing jackets, umbrellas and plenty of warmer clothing.

Saturday sport was particularly affected in central and southern regions as the damp cold air moved in.

Christchurch has seen some very warm conditions over recent days with temperatures climbing into the low 30s but late yesterday afternoon a cold southerly saw the thermometer plunging to near single figures. This morning it’s just 8 degrees with a southerly breeze.

For those still without power and water, the murky conditions were particularly unpleasant and living in tents and and under awnings was made more uncomfortable as the wind and showery conditions swirled around.In terms of rainfall the Christchurch airport has received 12mm of rain since 7pm last night

For one local resident there was an upside to the wintry weather and that was that the rain dampened down the very dusty conditions from the piled up liquefaction that’d been experienced this week due to blustery and hot nor’ west winds.

Last night a number of aftershocks were recorded in the city with the highest being 4.8.There were few reports of damage from the tremor – a fallen chimney, a burst water main, goods falling from shelves and an online report of liquefaction in Linwood. As one weatherwatch.co.nz viewer observed yesterday it’s now 6 months since the 7.1 earthquake was recorded and the numerous shakes have been a challenge for many in the area..

In the deep south there were reports of hail showers and a dusting of snow at higher elevations which is a stark reminder that the cold season isn’t too far away and that the door on summer is nearly closed.

Today, temperatures are expected to remain chilly and struggling to hit the mid teens in southern and eastern parts but it’s looking brighter in the west with temperatures likely to be slightly higher than their neighbours.