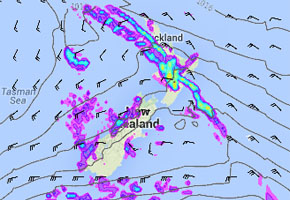 Lets get straight to it. Auckland, expect a period of showers to move in this evening with brisk northwesterlies. Winds change westerly later in the evening with showers easing, the odd shower continues overnight clearing before dawn the next morning. Not the best end to the day but staves off the ground getting dry a little longer. A low overnight of 15 degrees so not too cold.

After the strong winds that have been about Wellington today this evening will provide some relief, winds will still be a bit breezy from the north with mainly clear skies. Skies should be mainly clear overnight too. A low overnight of 13 degrees.

Christchurch may feel a cold southerly move through this evening however this possibility hangs in the balance. After a mostly sunny day and west to northwest breezes a southerly change works itâ€™s way north later this afternoon and early evening about the Canterbury coastline, Banks Peninsula marks the point at which this southerly doesnâ€™t move any further north and in turn the showers too. So Christchurch could expect a period of showers this evening but equally they may just slip to the south of the city and move offshore to the east over Banks Peninsula. Any showers that do move through shouldn’t last too long, although they could be a little spicy if they do move over bringing a short sharp shower or two.

Southerlies then die out later in the evening with clear skies overnight for the Garden City. A low overnight getting down to a nippy 5 degrees.