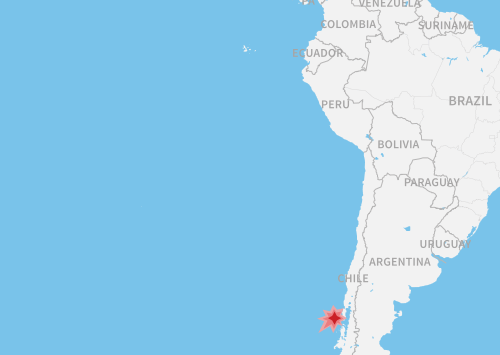 A magnitude 7.7 earthquake occurred off the coast of southern Chile Sunday, 40 km (about 25 miles) southwest of Puerto Quellon, according to the U.S. Geological Survey.

The Pacific Tsunami Warning Center issued a tsunami threat message for parts of the Pacific Ocean close to the earthquake. Tsunami waves 1-3 meters above tide level are possible on parts of the Chilean coast, according to the center.
The Hydrographic and Oceanographic Service of the Chilean Navy issued a tsunami alert for the region of Los Lagos.
Meanwhile, Chile’s Ministry of the Interior and Public Security has asked people to leave the beach areas of the regions of Bio Bio, La Araucania, Los Rios and Aysen near the quake zone.
Chilean President Michelle Bachelet expressed support to the people of her country through a tweet posted shorty after the quake hit.
“Much strength and mood to the compatriots affected by the earthquake in Chile and other areas of the south! Emergency protocols are already operating,” Bachelet tweeted.
View video and read more here via CNN.com