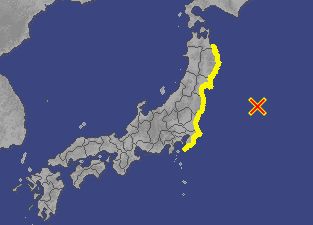 Updated 7:32am — A tsunami warning has been issued in Japan following a 7.3 quake which struck a short time before 7am.

While there is currently NO Pacific-wide tsunami warning – or even watch – as of 7am warning had been issued locally in Japan covering much of the eastern coastline north of Tokyo including Fukushima.

According to the Japanese Meteorological Agency a major tsunami is not expected but a tsunami may reach up to 1 Metre in places.  Keep in mind this is a wall of water a metre high and not just a one off wave.

A short time ago the JMA said a tsunami of 30cms had been detected in Miyagi pref.  This area was hit by a 10m tsunami back in March 2011.

A short time ago workers at the Fukushima nuclear reactor were evacuated from the waterfront according to Voice of America reporter Steve Herman.

The USGS says the quake was 7.3 as of 7am while Japan says it was 7.1.  WeatherWatch.co.nz reports the USGS for most international quakes..