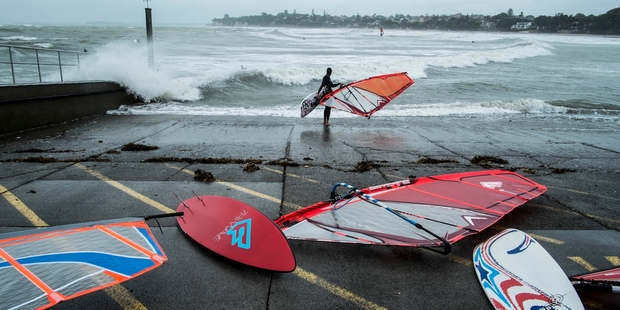 Former cyclone Lusi has so far proved to be more of a wind bag than a raging beast – to the delight of beach-bound thrillseekers in the North Island.

As the broad storm tracked south from the Far North, power was to cut to thousands of homes, roads were flooded by large coastal swells and trees toppled by the high winds.

But the anticipated widespread damage did not eventuate as Lusi was downgraded to a deep depression by landfall on Friday night.

Auckland Council Civil Defence controller Clive Manley said high tides on the east coast might cause coastal erosion due to the swell.

You can track Cyclone Lusi in real time here.

Earlier in the afternoon, a sea and air search was mounted after a boy was reported missing in the water at Takapuna.

Police later said the swimmer made it out of the water safely and went home, unaware he was the focus of a rescue operation.

Weather forecasters say the worst of former tropical cyclone Lusi is over for those living in northern regions, though it is packing a nasty parting punch as it tracks south today.

Severe weather warnings are in place for southern parts of the North Island and the top of the South Island but conditions are expected to improve during the day in Auckland and northern areas, according to the MetService.

Yesterday, the Fire Service responded to approximately 160 incidents in the northern region, mostly for trees on powerlines.

Firefighters also secured a roof in Orewa that was being lifted by strong winds.

Yesterday’s storm brought winds as high as 120km/h in the Hauraki Gulf, while the strongest gust was 139km/h recorded at Cape Reinga in the Far North.

While the rain was patchy, especially throughout Auckland, parts of the North Island were saturated.

The Auckland Harbourmaster said three boats had to be secured after they broke from their moorings in the heavy conditions.

A 7m swell was recorded at Marsden Pt in Northland and a ship was also redirected to shelter off the Coromandel Peninsula.