Low still on track this weekend 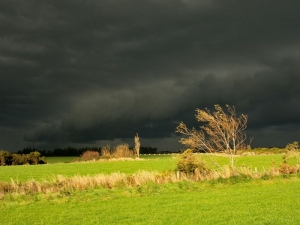 Yesterday we announced that an incoming low could cause problems for outdoor events this weekend and at the moment the timing still appears to be on track as previously mentioned.

It’s not overly vigorous however it’s enough to bring rain and strong winds to almost all places however not all at once.

The depression appears to approach the country late on Friday and West Coasters are the first ones to see the clouds rolling in off the Tasman.

All western and northern areas should see clouds thicken and rain fall overnight Friday or Saturday morning with winds picking up pace.

There’s still a chance of rain spilling over to eastern areas during Saturday which doesn’t often happen ina nor’ west flow.

When the front sweeps northwards temperatures will fall over southern and eastern areas later on Saturday and on Sunday with either showers or rain across these districts.

The amount of rain will vary from place to place but a decent dollop is likely for many rain guages and heaviest falls are likely to be out west.