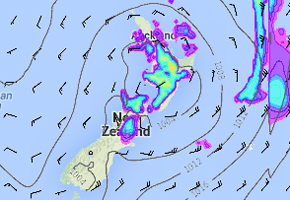 Of main interest will be a low pressure system affecting mainly the North Island mid week onwards, parts of the upper and eastern South Island get some weather from it also but nothing major. So, as always the run down is as follows.

Today sees fairly settled weather across the North Island with light winds and afternoon sea breezes in coastal areas, a low develops in the Tasman Sea while high pressure in the east keeps things calm for most. Expect sunny areas and some cloud, perhaps even a fog patch or two about inland areas to start the day. Northerly winds build about Wellington becoming brisk in the afternoon.

For the South Island expect light winds and warm temperatures in the east, some high cloud develops during the day also starting in Otago from morning. Cloudy spells on the West Coast with northeasterly winds, the odd drizzle patch then late afternoon rain about Fiordland.

Our low stays in the Tasman tomorrow but high pressure areas weaken over the North Island letting inclement weather start to develop. Expect a northeasterly airflow over the North Island with skies becoming cloudy in the morning for the upper half of the Island, some drizzle about Auckland northwards and the Bay Of Plenty, rain spreads south in the evening north of the Waikato. The lower half can expect sea breezes and some high cloud, an isolated shower is possible about the ranges of Wellington and Wairarapa in the afternoon.

Expect cloudy skies about Nelson and on the West Coast with patchy rain or drizzle easing in the afternoon and clearing for many as easterly winds develop, for the east things start out well however southerly winds sneak north during the day bringing cloud and the risk of drizzle later in the day.

On Wednesday our low pressure system gradually moves over the North Island. Morning rain heavy in areas about the upper North Island eases to the odd shower and sunny spells, it could turn unstable in the afternoon with heavy downpours about with a thunderstorm or two. Rain pushes onto the lower North Island during the afternoon then clears later in the evening as northeasterly winds tend northerly.

It’s looking good for the West Coast of the South Island with east to southeast winds and sunny weather. Some morning rain for Nelson, clearing afternoon. Drizzle about Canterbrury and Marlborough turns to rain later in the day, winds from the south. There may be some drizzle about coastal Otago in the morning then clearing, remaining fairly cloudy with easterly winds. Sunny spells for Central Otago and Southland with northeasterly winds.

Unstable Thursday. Yes on Thursday the low will sit right over the North Island, expect sunny spells and light winds with sea breezes for coastal areas. In the afternoon showers develop a few of which will be heavy and thundery anywhere south of about Auckland, due to the isolated nature of these events sometimes some areas will miss out on rain on a day thunderstorms look likely but there looks to be a fair chance of heavy falls for many areas, coastal fringes will be the least likely to receive rain. North of Auckland winds are from the west so sunny spells with only the odd shower seem more likely.

In the South Island expect some rain for parts of Canterbury, Marlborough and Nelson then clearing later in the day. Sunny for most other places with light winds, coastal Otago has brisk northeasterlies however with sunny spells.

The end of the working week brings sunny spells to many North Island areas with westerly winds, there may be a brief shower at times in western areas otherwise conditions look fairly dry. The best weather looks to be out east however the departing low could still contain enough oomph to bring an afternoon shower to Hawkes Bay and Gisborne. Conditions looks settled in the South Island, westerlies in the west and northeasterlies in the east. Showers look possible about Fiordland. 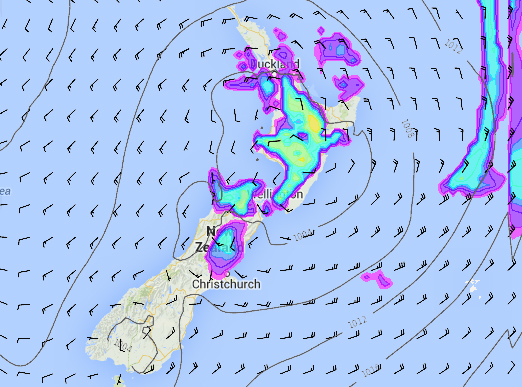