Low pressure system for the weekend 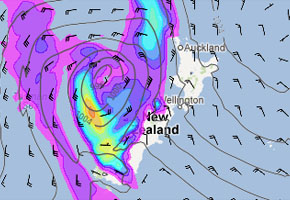 Saturday is still looking similar as projected in yesterday afternoon’s outlook but Sunday however is really turning into a mixed bag. We have a low pressure system developing out west of New Zealand today on a front moving into the Tasman Sea, on Saturday the low looks fairly organised and moving eastwards. But during the course of Sunday it begins to tire from afternoon and loses it’s strength somewhat, but some places may still pack a punch, as Phil put it once the energy gets spread out and not so concentrated as these lows unwind.

So for Saturday it is much the same but a few changes. Skies will be mostly cloudy over the North Island with brisk northerly winds, rain develops in the west during the afternoon then clears later in the day as winds change westerly west of about Waikato. Fine out east with high cloud and breezy northerlies, a few spots of rain possible at night.

Fine on the east coast of the South Island with high cloud, showers in Southland and Otago move through into Canterbury and Marlborough in the evening with south to southeast winds. Rain for the West Coast with heavy falls in South Westland.

On Sunday the front over the North Island may stall about Bay Of Plenty particularly in the east due to the blocking nature of the high out to the east of the country, so keep an eye out for possible heavy rain warnings on Sunday for that area. Expect sunny areas and some cloud for the rest of the North Island with northerly breezes, a few isolated showers developing late afternoon or evening in the west. A few of those showers could be heavy and thundery then clearing at night. The Wairarapa and Wellington will remain largely dry with northerlies, cloudy north of Hawkes Bay with some rain from afternoon.

For the South Island on Sunday there is likely to be a few areas of rain for the upper half of the Island, particularly in the likes of Nelson and the surrounding ranges. There may also be sunny breaks also, winds will be variable but mainly from the northerly quarter. Southland and Fiordland will likely remain dry with some sun and light winds, other areas from Canterbury down through to Otago are likely to experience sunny areas and some cloud with winds tending southerly or southwesterly. There may be a few showers about mainly in the morning.