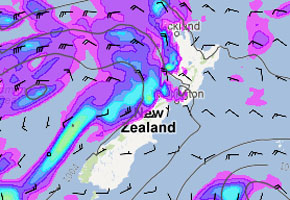 Tomorrow the conditions will reflect the fact that the first of our new batch of lows is approaching. It will be dry for the most part to start off in the morning around the country however showers will move into western areas during mid to late morning then turning to rain in the afternoon.

Heavy falls are possible in the afternoon in Taranaki and north of Waikato with the risk of a thunderstorm or two. Also along the West Coast of the South Island rain will be heavy at times from afternoon however clearing later in the evening about Fiordland.

The east coast of the North Island will remain dry all day with northeasterlies freshening and some high cloud increasing.

Mostly sunny in Otago, some cloud at times thickening along the coast in the afternoon where there may be some drizzle by evening, drizzle or patchy rain spreading inland at night. Dry in Southland for most of the day with northeasterlies tending southeast later, sunny areas and some increasing cloud.