Low moving in from the north 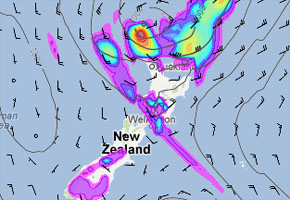 The low that has now decided to move in from the north over the upper half of the North Island is likely to deliver some rain possibly heavy to a few areas and windy conditions. Northland is likely to get some heavy rain for a time later on Thursday with strong southeasterly winds, on Friday the heavy rain focus shifts to East Cape, perhaps also eastern Bay of Plenty and northern Hawkes Bay. Strong southeasterly winds are also likely on Friday about East Cape.

For the likes of Auckland, Waikato and eastern Bay of Plenty while it will be cloudy for a time with spells of rain also the nature of the wind flow will mean these areas don’t get as wet as the others mentioned above, the Ruahine and Huiarau Ranges impede the rain penetrating as much into those regions.

The South Island will remain mostly sunny on Thursday however inland there may be a few isolated showers about the ranges, particularly in the Mackenzie Country in the afternoon as the sun heats the land and produces some convection. Friday remains largely sunny aswell with northeasterly breezes along the east coast, light winds elsewhere. On both days some cloud will hang around the top of the South Island i.e. Nelson and Marlborough with the chance of a few showers at times.

On Saturday the low over the North Island weakens and begins to push off then come Sunday we have an increasing west to northwesterly airflow over the country before a cold front on Monday.