Home > News > Low looking to stay to the north, finall...

Low looking to stay to the north, finally some settled weather soon 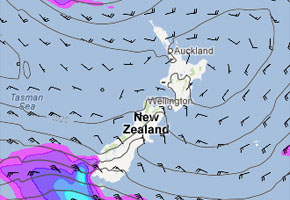 Last week looking into charts for this week there was some potential for a low pressure system to form to the north of New Zealand and possibly cause heavy rain issues for the North Island early this week. The main candidates being Northland, Coromandel, Gisborne and Hawkes Bay. However it does look like this low will mostly keep away and we are finally set to have a spell of settled weather this week although the West Coast of the South Island is likely to get a few showers from time to time.

Tomorrow there is likely to be rain in Northland clearing later in the evening and there will still be the odd shower about north of the Waikato in the morning and early afternoon, a few showers may affect the lower North Island and lower South Island also. By Wednesday the weather is looking very good for most places with light winds, Wellington will get increasing northerlies. Cloud and showers will develop later in the day on the West Coast of the South Island.

Thursday sees a front moving north over the country however it weakens considerably the further north it goes, mainly this will see showers for the West Coast of the South Island and south of Timaru on the east coast. Friday see’s an anticyclone taking control coming in from the west.

While it will be fairly settled this week Aucklanders are likely to have breezy southwesterly winds on Thursday and Friday with a few areas of cloud so the temperatures may feel relatively a little cool on those days.

The only potential for any weather causing issues may be later on Wednesday where strong northwesterlies are likely to build in inland areas from Otago up into Canterbury, they will ease later in the night or towards dawn on Thursday however.