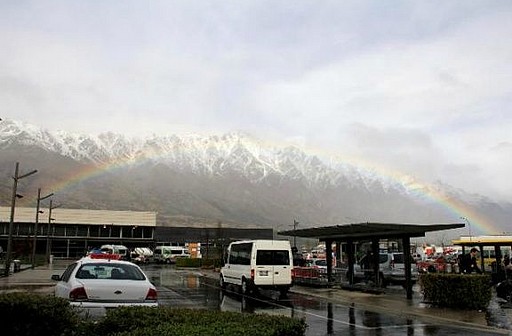 An incoming low is looming large and is on its way to move over the country on Saturday and its lasting effects will still be felt on Sunday.

Rain is moving over western and northern areas late Friday/early Saturday and at first it’s looking promising out east.
It’s just a false sense of security as rain should also spill eastwards over the divide over both islands and then if that’s not enough a southerly following the front will drop temperatures yet again.

“It seems after a bit of a break fronts and lows are back in the picture and this weekend it’s yet another in the series but perhaps with a bit of a bite” says weather analyst Richard Green.
Head weather analyst Philip Duncan says” I’ve just arrived back in the country and this sort of weather pattern was exactly what we were having before I left”.
Both Mr Green and Mr Duncan say this isn’t exceptional for spring but seems ongoing and disruptive for quite a few people and events across the nation.”A lot of work goes into all sorts of events at this time of year but year after year they’re vulnerable to all sorts of conditions” says Philip Duncan.”The tour of Southland cycle race is a classic example and gets hit each time with a combination of sunny and warm breezes but also atrocious conditions. I wonder if organisers could perhaps alter the event on the calendar?”

Temperatures overall have remained a smidgen below normal for the early part of November as these frontal systems aren’t allowing too much warmth to hang over the country.

Before the weekend arrives another front is moving across the country during Wednesday and Wednesday night. Nor’ westers will see cloud thicken pretty smartly in western areas during the day and/ or night before the rain hits western and northern regions

WeatherWatch.co.nz believes this front will be shortlived but enough to certainly wet the concrete and more.

Was really looking forward to a weekend camping with my kids in Orewa… oh well, the joys of spring ah…

Not the same for me. October was slightly warmer than average (also sunnier and drier). This month so far has been much cooler than average, though not dull or wet.